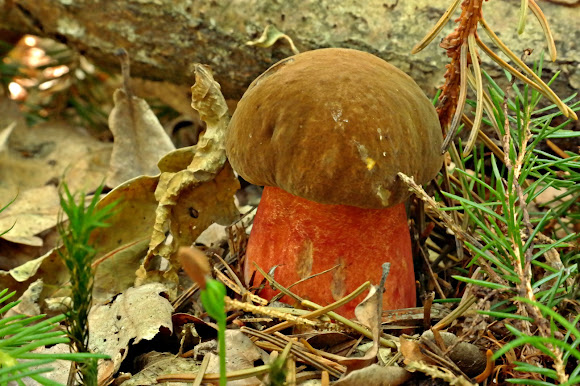 Neoboletus luridiformis is a large solid fungus with a bay-brown hemispherical to convex cap that can grow up to 20 cm (8 in) wide, and is quite felty initially. It has small orange-red pores that become rusty with age, and bruise blue to black. The tubes are yellowish-green, and become blue quickly on cutting. The fat, colourful, densely red-dotted yellow stem is 4–12 cm (2–5 in) high, and has no network pattern (reticulation). The flesh stains dark blue when bruised; broken, or cut.There is little smell. The spore dust is olive greenish-brown. The similar Suillellus luridus has a network pattern on the stem, and seems to prefer chalky soil.

The fungus grows in deciduous or coniferous woodland, in summer and autumn, in Europe. It is often found in the same places as Boletus edulis. It is also widely distributed in North America, and is especially common under spruce in its range from Northern California to Alaska. In Eastern North America it grows with both soft, and hardwood trees.It seems to prefer acid soils.

Mild tasting, Neoboletus luridiformis is edible after cooking, though caution is advised as it resembles other less edible blue-staining boletes, and should thus be avoided by novice mushroom hunters.