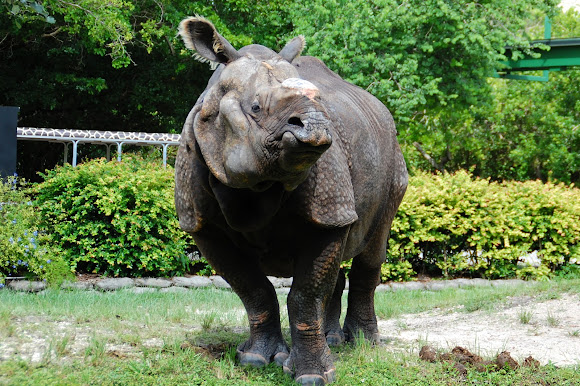 The Indian rhinoceros (Rhinoceros unicornis) is also called greater one-horned rhinoceros and Asian one-horned rhinoceros and belongs to the Rhinocerotidae family. Listed as a vulnerable species, the large mammal is primarily found in parts of north-eastern India and in protected areas in the Terai of Nepal, where populations are confined to the riverine grasslands in the foothills of the Himalayas. Typically weighing between 1,600 to 3,500 kg (3,500 to 7,700 lb), it is the fourth largest land animal. The Indian rhinoceros once ranged throughout the entire stretch of the Indo-Gangetic Plain but excessive hunting reduced their natural habitat drastically. Today, about 3,000 rhinos live in the wild, 2,000 of which are found in India's Assam alone.

Today, their range has further shrunk to a few pockets in southern Nepal, northern Bengal and the Brahmaputra Valley. In the 1980s, rhinos were frequently seen in the narrow plain area of Royal Manas National Park in Bhutan. Today, they are restricted to habitats surrounded by human-dominated landscapes, so that they often occur in adjacent cultivated areas, pastures, and secondary forests.

Happy World Rhino Day 2013! Catch today's rhino blog where I shared the truth about this terrible trade and the many hurdles that lie ahead for rhino conservation:
http://blog.projectnoah.org/post/6196453...

What beautiful close ups of the One horned Rhino Jilly! If you like you can add them to the Rhinos of the World mission and help us to raise awareness of the Rhino's plight. http://www.projectnoah.org/missions/1284...