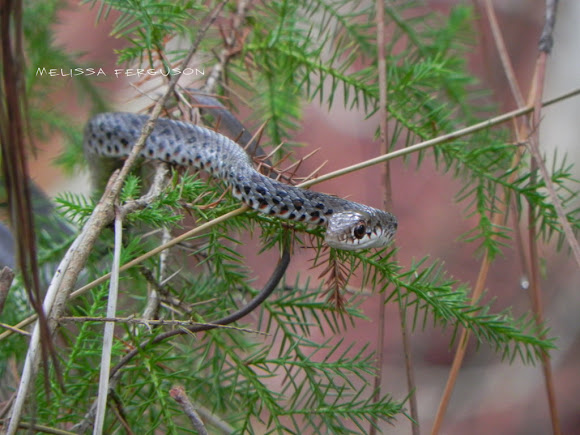 Juvenile color is gray with distinct reddish-brown blotches fading into a solid-colored tail.

Spotted this snake perched in a Southern Red Cedar. (Frequently near water but also in brush, trash piles, roadsides, swamps, suburbia; it is the most common snake in residential neighborhoods in Florida. It spends most of its time on the ground, but it's a good tree climber and may be found in shrubs and trees where the calls of birds draw attention to it. Most racers prefer open, grassland type habitat where their keen eyesight and speed can be readily used, but they are also found in light forest and even semi-arid regions. They are usually not far from an area of cover to hide in.-Wikipedia)

Harmless (Non-Venomous), though they will readily bite to defend themselves. Racers are one of the snakes most likely to be seen by Floridians. It inhabits both rural and urban habitats and is frequently seen in residential areas during the daytime. Like other racers, it is fast moving and can climb and swim well. When discovered, the racer will usually flee for shelter, relying on its speed and agility to avoid capture. However, when cornered, its only defense is to strike. Its bite is harmless, but its needle-sharp teeth can cause bleeding. When annoyed, it may rapidly vibrate its tail in the leaf litter, producing a buzzing sound.-Florida Museum of Natural History

I agree, most likely a Southern Black Racer. Great pics.

Thanks J and Neil! In not knowing snakes, I was afraid of approaching any closer for better photo's-had never seen a snake in a branch of a tree before! The black racers I have seen in the past were fast as lightning but this one just sat on the branch!

Cool spotting Melissa! Yes, I think it is a juvenile black racer.