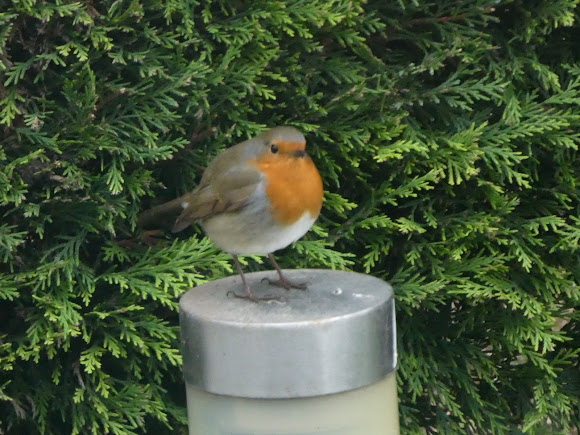 (Wiki:) About 12.5–14.0 cm (5.0–5.5 inches) in length. Male and female are similar in colouration. Juveniles don't have the orange breast yet and are darker coloured than adults. Conservation status: Least Concern (see next line) EX EW CR EN VU NT [ LC ] Found across Europe, East to Western Siberia and South to North Africa.

Spotted in rural-suburban neighbourhood next to a river, seperated from main village by some unused grass-lands. Relatively small protected nature reserve next to neighbourhood.

Visits bird feeder at my parents' multiple times a day. Wanted to add this as my first spotting because it's such a lovely bird to spot in the garden. Interesting note: my mother said "This one is big!", but it wasn't, as is visible in the difference between photo 1 and 3. I see this with any bird: they can make themselves big, probably by extending their feathers like human body hair can stand upright? This robin is usually on its own, but once or twice we saw two at once. We regularly saw it (and two at once) fly to a low place under a bush near the car. We think they might be nesting there, very tightly grown bush though, so hard to see. I read they nest at ground level so might be the case. The robin in the garden is often seen looking at the gang of blue and great tits before hopping under the feeder to pick up seeds that the tits drop (the tits are super picky and throw anything they don't want down). Or the robin joins the gang of about 9 house sparrows that often visits the feeder (the feeder has just 4 holes to get food though. The sparrows sometimes push each other off which we find amazing). When few birds are around the robin goes for the bird peanut butter and the bird feeder (small seeds) too. We're Dutch and in Dutch the european robin is called a "roodborst" which translates to "red breast". Wikipedia says that was the robin's original English name, then "robin redbreast" and then just "robin". Final two photos are quite blurry but show the robin swallowing a small seed which I thought was neat. Fun fact: birds have a crop in their chest which is where food is digested slowly before going to their stomache (https://www.thespruce.com/digestion-fact... see "3 The Digestive Tract"). This American eagle conservationist (and some other wildlife) feels the chest of big predatory birds to feel if there is enough food in their crop to check if the birds are eating enough: https://www.youtube.com/watch?v=VO34jppQ... . Hope you enjoy the photos! European Robin in the Tree of Life: https://www.onezoom.org/life.html/@Erith...

Thank you Jae! I'm thinking of adding a spotting every weekend from now, because I have some photo's of various species, also woodpeckers which are awesome haha.