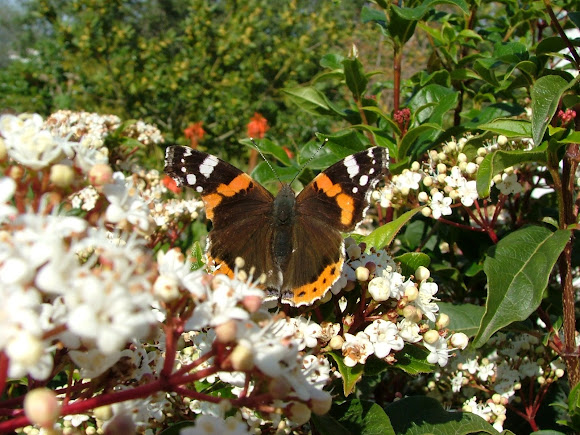 The Red Admiral has a 45–50 mm (1.8–2.0 in) wing span. The species is resident only in warmer areas, but migrates north in spring, and sometimes again in autumn. This large butterfly is identified by its striking dark brown, red, and black wing pattern. More specifically, the dark wings possess orange bands that cross the fore wings and on the outer edge of the hind wings; white spots on the dorsal fore wings near the front margin; reddish bars on dorsal surface of all four wings. The caterpillar feeds on nettles, and the adult drinks from flowering plants like the Buddleia and overripe fruit. In northern Europe, it is one of the last butterflies to be seen before winter sets in, often feeding on the flowers of ivy on sunny days. The Red Admiral is also known to hibernate, re-emerging individuals showing prominently darker colourings than first brood subjects. The butterfly also flies on sunny winter days, especially in southern Europe. In North America, the Red Admiral generally has two broods from March through October. Most of North America must be recolonized each spring by southern migrants, but this species over-winters in south Texas.