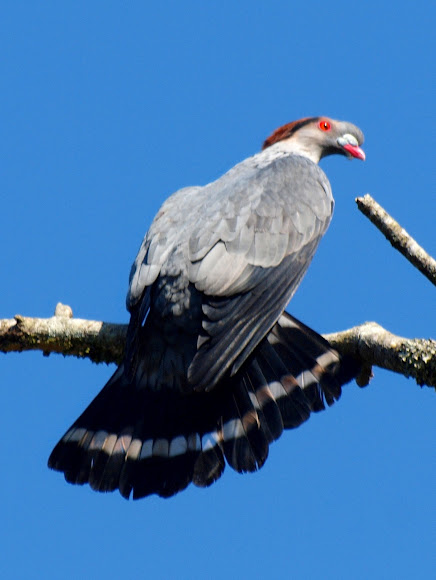 The Topknot Pigeon is a large grey pigeon with a swept back crest that is grey in front and rusty red behind, giving the head an unique shape. It is darker grey above, with dark grey, rounded wings, and lighter grey below, with a pale tail band across the black tail. The eye and bill are red, and the bill has two large bluish-green bumps at the base. Females have a smaller, paler crest than males. Young birds resemble females, with more mottling and have a browner head with a much smaller crest. This species flies strongly and roosts high in tall trees. It may be seen feeding acrobatically among fruits, often hanging upside-down to reach them. It can be located by the sounds of falling fruit and its sharp screech while feeding.

The Topknot Pigeon is found in rainforests and nearby wet forests and woodlands, especially along moist sheltered gullies. It can also be found in drier forests and will fly across open areas to feed in rainforests or disturbed areas such as remnant forest patches, cleared farmlands, exotic trees and shrubs, particularly Camphor Laurel and privet. It is very rarely seen in suburban areas, but will forage on the outskirts of urban areas if Camphor Laurel and other fruits are available.

Feeding: The Topknot Pigeon is frugivorous, feeding on a variety of rainforest fruits, as well as those of the introduced Camphor Laurels. They mainly feed in the upper canopy, hanging from branches, often upside-down, to reach fruit, flapping their wings loudly to keep balance. They can be detected by the quantities of fruit they dislodge and the loud screeching they make while feeding. They will travel long distances to find food, often in large, straggling flocks. Breeding: After an elaborate courtship of bowing and parading displays, with males also flying very high over canopy to attract females, the Topknot Pigeon forms monogamous breeding pairs. Both parents build the flat, loose and often flimsy stick nest in the crown of a tree, usually among bushy branches or vines, from 2 m to 12 m from the ground. Both sexes incubate the eggs and feed the young, using regurgitated 'pigeon milk' from their crops in the earliest stages. Adults call to their young when returning to the nest, and they are difficult to dislodge from the nest if disturbed, crouching protectively over their young until an intruder is quite close.

I can second that one Mac! However i've finally managed to get a spotting as they're nesting in a low tree outside my window. Very lucky!

Not easy ones to photograph Leanne, usually stay well up in the tree tops & always on the move.

What a great spotting MacC! I'm yet to see one of these. Nice one :)