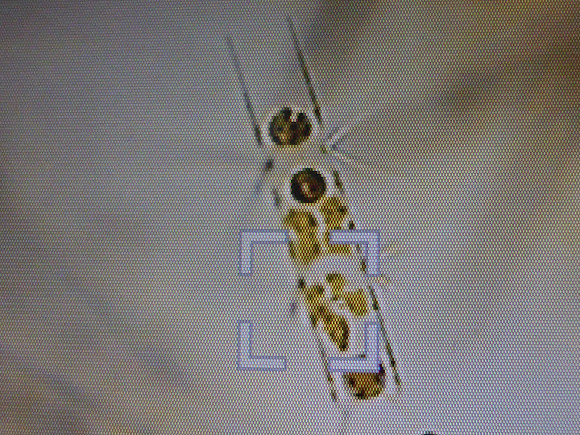 Chaetoceros was the most abundant genus represented in this sample, and is one of the largest genera of marine plankton. There was likely a few species from this genus, so I will try and separate them into different spottings as best I can. Each cell has two spines (they look like long hairs) on each valve and that is one of the distinguishing features of this genus. Most that we saw formed straight chains, but some species in this genus form spiral chains.

A marine biologist on board skimmed some plankton using really fine mesh nets and we took a drop from that sample and placed it under a microscope. The sample was skimmed in Izhut Bay just off Afognak Island in somewhat shallow water (less than 200 feet).

Plankton from this genus can be damaging to fish, as the spines can cut up the gills of small fish, and during large blooms they can even clog up their gills. Spines also can introduce bacteria when they damage tissue and also stimulate mucus production, both of which can be damaging and sometimes even deadly to fish.