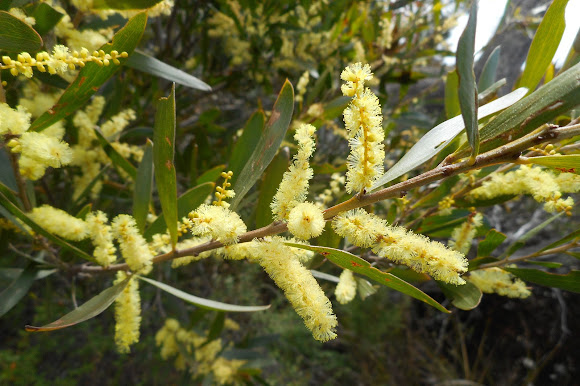 Aka Gossamer Wattle and Weeping Acacia. Small tree occasionally to around the 6-8 metres in height, but often grows as a bushy shrub. It's a very useful plant. Heavy flowering provides resources for a wide range of invertebrates, particularly bees. Seed pods and seeds are eaten by parrots. Sap flow is relished by Sugar Gliders. Foliage has some use as fodder for livestock such as goats. Very useful for controlling erosion, especially in gullies, and as a wind breaker and shade tree. This is a very hardy species that is well-adapted to extremes of weather, and is native to New South Wales, Queensland and Victoria. Unlike some wattle species, it is generally killed by fire in the wild, but has a long-lived soil seed bank.

Granite soils, extreme summer and winter temperatures, and high altitude at Boonoo Boonoo National Park, in the region of NSW near the township of Tenterfield. Specimen found beside a section of the river called Morgan's Gully. All pristine, native vegetation in this area.