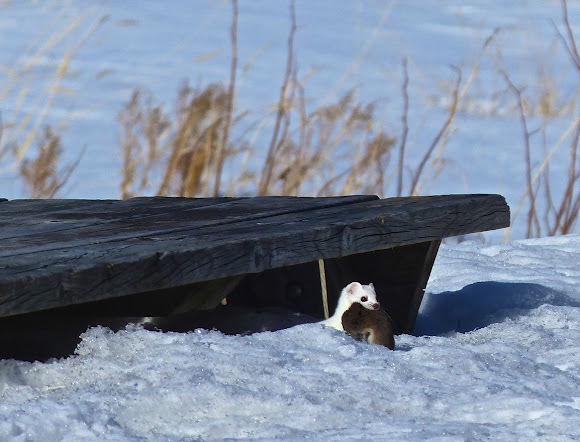 The winter fur is very dense and silky, but quite closely lying and short, while the summer fur is rougher, shorter and sparse. In summer, the fur is sandy-brown on the back and head and a white below. The division between the dark back and the light belly is usually straight, though this trait is only present in 13.5% of Irish stoats. The stoat moults twice a year. In spring, the moult is slow, starting from the forehead, across the back, toward the belly. In autumn, the moult is quicker, progressing in the reverse direction. The moult, initiated by photoperiod, starts earlier in autumn and later in spring at higher latitudes. In the stoat's northern range, it adopts a completely white coat (save for the black tail-tip) during the winter period. Differences in the winter and summer coats are less apparent in southern forms of the species. In the species' southern range, the coat remains brown, but is denser and sometimes paler than in summer.

Stoat territoriality has a generally mustelid spacing pattern, with male territories encompassing smaller female territories, which they defend from other males. The size of the territory and the ranging behaviour of its occupants varies seasonally, depending on the abundance of food and mates. During the breeding season, the ranges of females remain unchanged, while males either become roamers, strayers or transients. Dominant older males have territories 50 times larger than those of younger, socially inferior males. Both sexes mark their territories with urine, faeces and two types of scent marks; anal drags are meant to convey territorial occupancy, and body rubbing is associated with agonistic encounters.

As seen on this spotting, mouse-like rodents predominate in the stoat's diet. Spotted in Bic National Parc, Quebec.