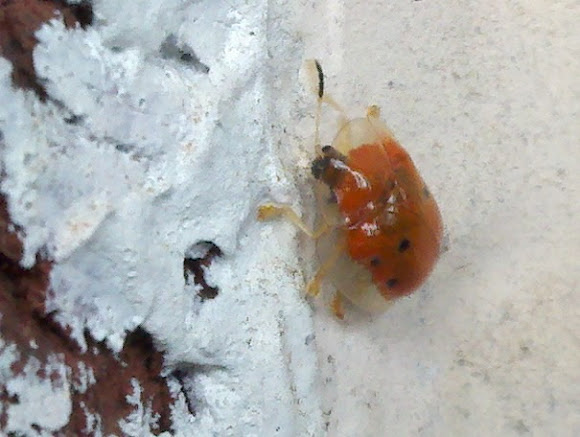 "Golden tortoise beetles (Charidotella sexpunctata) are common North American beetles that can be found on morning glory leaves, which are their preferred food. They can change color, looking initially like tiny jewels, or golden ladybugs, but can alter the reflectivity of the cuticle so the outer layers become clear, revealing a ladybug type of red coloring with black spots. This color change is accomplished by microscopic valves controlling the moisture levels under the shell. Various populations of this beetle also have black markings obscuring the underlying colors to various degrees, and it is this variation in appearance that has led to the use of multiple names for this species." http://en.wikipedia.org/wiki/Golden_tort...

Found on the side of my house- my porch rail is covered with blooming morning glory vines and according to Wikipedia these vines are their favorite food source.