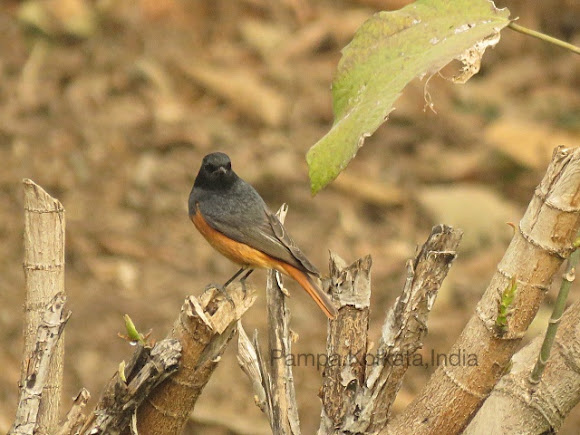 A small passerine bird. it was formerly classed as a member of the thrush family (Turdidae), but is now known to be an Old World flycatcher. The adult male is overall dark grey to black on the upperparts and with a black breast; the lower rump and tail are orange-red, with the two central tail feathers dark red-brown. The belly and undertail are either blackish-grey or orange-red; the wings are blackish-grey with pale fringes on the secondaries forming a whitish panel or all blackish . The female is grey to grey-brown overall except for the orange-red lower rump and tail, greyer than the common redstart; at any age the grey axillaries and underwing coverts are also distinctive (in the common redstart these are buff to orange-red). One-year-old males are similar to females but blacker. Its quick ducks of head and body are robin-like, and its tail is often flicked. The male has a rattling song and a tick call.

It nests in crevices or holes in buildings. The species originally inhabited stony ground in mountains, particularly cliffs, but since about 1900 has expanded to include similar urban habitats including bombed areas during and after World War II, and large industrial complexes that have the bare areas and cliff-like buildings it favours.It will catch passing insects in flight.

I saw it in Kolakham in Neora Valley National Park area in northern hilly area of West Bengal, India. Another site address is - http://www.oiseaux-birds.com/card-black-...