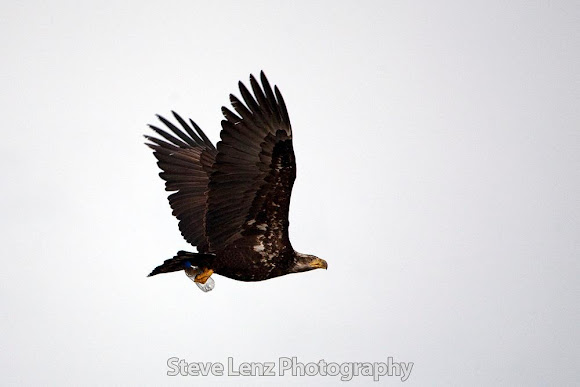 The Bald Eagle (Haliaeetus leucocephalus Greek hali = salt, aeetus = eagle, leuco = white, cephalis = head) is a bird of prey found in North America. It is the national bird of the United States of America and appears on its Seal. This sea eagle has two known sub-species and forms a species pair with the White-tailed Eagle. Its range includes most of Canada and Alaska, all of the contiguous United States, and northern Mexico. It is found near large bodies of open water with an abundant food supply and old-growth trees for nesting.

It sat for a while biting the bottle making quite the racket (crackling plastic sounds). I suppose like most juveniles it could be a combination of inexperience and play to learn skills. I would think after the first bite it would realize it wasn't a food item. It made no attempts to swallow any of the bottle.

I wonder why he was carrying off the bottle? Inexperienced juvenile? Playing? Perhaps it was shimmering like a fish in the water? Great shot, all be it a sad site.

That is beautiful (the bird) but sad (the plastic bottle).