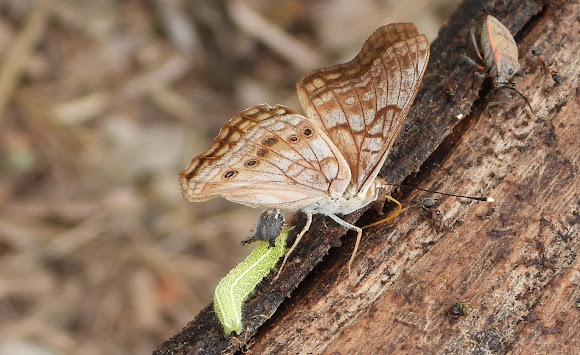 This is the first time I've been able to capture both the adult and larvae of a butterfly species in the same frame. The larvae or caterpillar has a body that has numerous tiny yellowish-white, raised, seta-bearing bumps (chalazae). Some of the chalazae are arranged to form narrow stripes on the back and sides. Its head is brown with a pair of stout black horns dorsally. The adults can have some variation in appearance. Brown or grey with white markings and a row of dark eyespots on the hind wings. To differentiate from the Tawny emperor there is a dark eyespot and white markings on the forewing that the Tawny emperor doesn't have (seen in pics 3 and 4 -- though somewhat faint because of an older specimen). This is a female -- males are darker.

Spotted on a log along the "Hackberry Trail" at the National butterfly Center in Mission, Texas. All along this long trail are hackberry trees, the host plant for Asterocampa celtis.

Brian38 a week ago

Thanks for your kind comments, Sukanya and Neil. It was a curious interaction.

Neil Ross a week ago