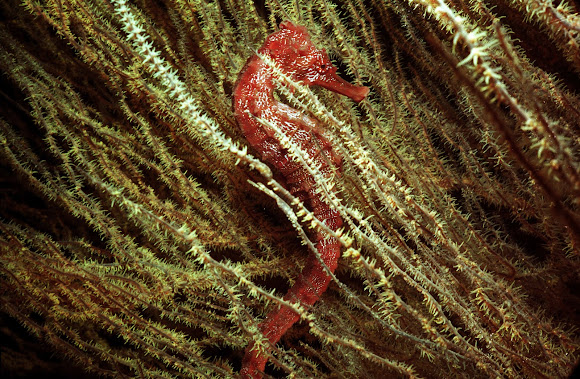 This seahorse was about 8” in length, although according to online sources they get as large as 12”. It is considered the largest species of seahorse in the world. As pictured, it has a head and snout which resembles a horse’s head. It as well has a tail which helps it cling to gorgonians and other organisms attached to the reef to hold steady in currents,

This fish was spotted in the Galapagos Islands, diving off the coast of Santa Cruz. It was at a depth of approximately 50 feet, in a boulder-strewn area with gorgonians and encrusting sponge.

Seahorses lack teeth and a digestive system including a stomach. The snout is small, and they consume small plankton, including very small crustaceans which are at the bottom rung of the ocean food chain. They suck or ‘inhale' the plankton through their snout, and have to eat often to sustain themselves. They as well are masters of camouflage with the ability to blend with their surroundings by changing color as well as clinging to other reef-dwelling organisms which have a similar shape,

Thanks Liana and Felix.

Thanks Danielle, I do appreciate the recognition!

Congratulations Jim, this beautiful seahorse has earned you a Spotting of the Day! Thanks for your ongoing outstanding contributions to Project Noah.

Awesome capture Jim,congrats and thanks for sharing