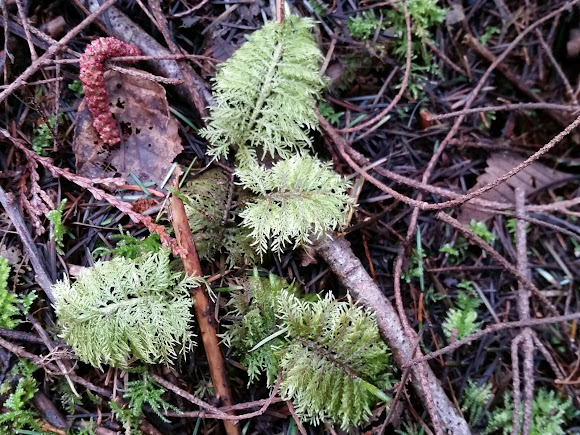 Rhytidiadelphus loreus, also commonly known as Lanky Moss, is a nonvascular "feather moss" species that is a key component of a healthy, thriving forest ecosystem. Lanky Moss grows in North America, Canada and Europe. It is primarily a coastal species that grows in moist, coniferous forests. It grows on decaying logs, the forest floor and as an epiphyte on living trees. Its key function is nitrogen fixation, water retention and temperature insulator.-Wikipedia

Rhytidiadeplhus loreaus is widespread and can be found in United States, Canada and Europe. In the United States it is specifically located in southeast Alaska, California and eastern Montana. While in Canada it can be found in the providences of British Columbia, New Brunswick, Nova Scotia and Quebec. Lanky Moss can also be found in parts of Europe, mostly in mountainous regions where moisture can be trapped in shaded pockets of the mountains. It grows in north-western Europe in countries such as Norway, Iceland and Greenland. Lanky Moss is usually a coastal species that grows in moist environments, preferably in shady, dark locations. It can be found in low elevation to subalpine elevations of 4,000 ft. In coniferous forests it is a dominant species of moss that covers the forest floor. It commonly covers decomposing wood such as a fallen trees or rotting logs. Lanky Moss can also grow on rocks. It can also take on epiphytic qualities and grow at the base of living trees. Lanky Moss grows exceptionally well on soil types such as raw humus, acid humus or peat. This is due to the amount of moisture, decaying matter and nitrogen in these top layers of soil that Lanky Moss can thrive on. Rhytidiadeplhus loreus is a flourishing and abundant moss that is not at risk of extinction.-Wikipedia