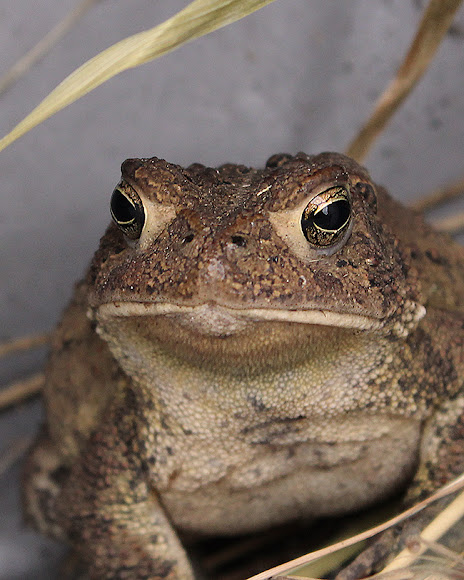 Fowler's toads are usually brown, grey, olive green and rust red in color and have black edged dark spots on its back, with a light middorsal stripe. In each of the dark spots there are found to be three or more "warts". The ventral surface (belly) is usually whitish and almost completely unspotted. B. fowleri is noted for having a single dark spot on its otherwise spotless belly. Males are often found to be darker in color while females are found to be lighter. Its body measures between 5 to 9.5 cm in length. Fowler's toad tadpoles have a short oval body and a long tail with an upper and lower fin. Their size is 1 to 1.4 cm long (Wright, 1949; Collins, 1991).

Fowler's toads prefer living in open woodlands, sand prairies, meadows, and beaches. They like to burrow into the ground during hot, dry periods and in the wintertime (Harding 1992; Harding 1997).

Behavior There are some conflicting opinions about the behavior of B. fowleri. One source indicates that this type of toad is completely nocturnal (Behler,1996). Another source states that Fowler's toad is mostly active in the daytime, except during hot days or very cold days when it will burrow into the ground (Harding, 1992). Both sources agree on how Bufo fowleri reacts to predators and the defenses they use to protect themselves. Potential predators of B. fowleri include snakes, birds, and smaller mammals. One defensive behavior it will use is its coloration to blend into its surroundings (camouflage). These toads are able to do this because they tend to have coloration that is more natural, or earth toned. Another defense includes a noxious secretion that comes from the large warts on their backs. If attacked, this secretion will irritate the predator's mouth and, if ingested, can be poisonous to smaller mammals. If roughly handled, B. fowleri will also lie still on their backs and play dead (Behler, 1996; Harding, 1992; Harding, 1997).