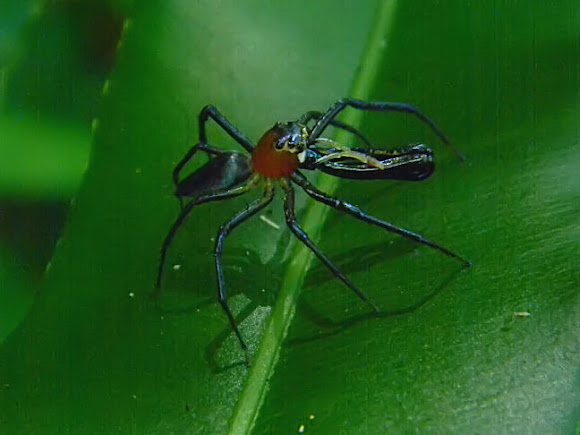 This is a jumping spider of the genus Bathippus. Jumping spiders (family Salticidae) are a diverse charismatic group of mostly small spiders with big eyes in a characteristic arrangement. "They are not web builders, instead using their excellent eyesight to stalk their prey much like tigers do. The males also perform elaborate mating dances, where they wave their legs and pedipalps in the air in an attempt to convince females that they would make a good mate. Salticids exhibit a vast diversity of body forms, with some species mimicking ants, beetles, or pseudoscorpions. [They] are also known as jumping spiders, due to their ability to jump incredible distances in relation to their size." http://biodiversity.ubc.ca/museum/projec... Bathippus usually possesses long curving fangs which gives them a formidable appearance.

This is the same species as seen in the same general area on the previous day in this spotting http://www.projectnoah.org/spottings/127...