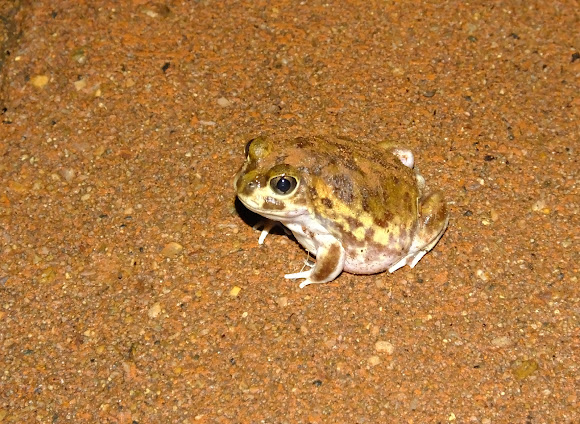 As their name implies, burrowing frogs dig into the sand to hide from the heat and dryness of the harsh Australian desert climate: sometimes for years, until enough rain has fallen for them to emerge, eat and mate The females we saw in breeding pairs were approx 3" long, not including legs and the call was a raspy croak, as opposed to the trilling we heard closer to the rock(but didn't see the frogs as they were hidden in the brush). This fat sassy frog was about 2 1/2 inches long

on the grounds of Yulara resort, Uluru, NT Australia

We were there during the recent "once in a half century" rain storm that closed the park and the airport and did considerable damage to the resort. By far the best of the best, however I will have another individual and a mating pair as spottings soon

Not sure, Mark. I spent about an hour looking at pictures and reading zone maps and not one of them spoke to me. UNless this and the other I took were separate species. The highly vertical pupils have me stumped in that spenceri doesn't appear to be that crisply vertical. Caught this guy in the dark of course, and so they're expanded.

The MnMs 3 years ago