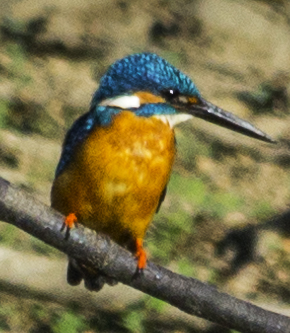 This species has the typical short-tailed, dumpy-bodied, large-headed, and long-billed kingfisher shape. The adult male of the western European subspecies, A. a. ispida has green-blue upperparts with pale azure-blue back and rump, a rufous patch by the bill base, and a rufous ear-patch. It has a green-blue neck stripe, white neck blaze and throat, rufous underparts, and a black bill with some red at the base. The legs and feet are bright red. It is about 16 centimetres (6.3 in) long with a wingspan of 25 cm (9.8 in), and weighs 34–46 grams (1.2–1.6 oz). The female is identical in appearance to the male except that her lower mandible is orange-red with a black tip. The juvenile is similar to the adult, but with duller and greener upperparts and paler underparts. Its bill is black, and the legs are also initially black. Feathers are moulted gradually between July and November with the main flight feathers taking 90–100 days to moult and regrow. Some that moult late may suspend their moult during cold winter weather.[citation needed] The flight of the kingfisher is fast, direct and usually low over water. The short, rounded wings whirr rapidly, and a bird flying away shows an electric-blue "flash" down its back. In North Africa, Europe and Asia north of the Himalayas, this is the only small blue kingfisher. In south and southeast Asia, it can be confused with six other small blue-and-rufous kingfishers, but the rufous ear patches distinguish it from all but juvenile blue-eared kingfishers; details of the head pattern may be necessary to differentiate the two species where both occur. The common kingfisher has no song. The flight call is a short, sharp whistle chee repeated two or three times. Anxious birds emit a harsh, shrit-it-it and nestlings call for food with a churring noise.