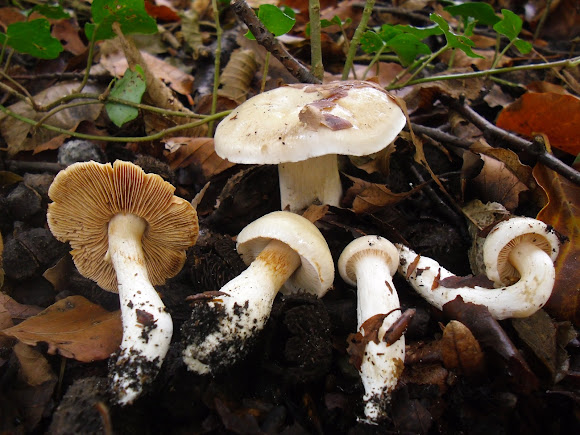 I have posted this collection of Cortinarius on Facebook in a few mycological groups (two Dutch groups that I am hosting and the one from the British Mycological Society). Here a couple of well educated (amateur)mycologists took a shot at identifiyng this white mystery Cort. Here are some of the pieces I've posted to see how the proces went: |-| "Could this be Cortinarius ochroleucus aswell? Or is this another Cort or maybe even Hebeloma? There was no particular scent, maybe slightly sweet. Abundant under Fagus. Viscid cuticle, rusty brown spores, ring zone, cortina present. I have collected three specimen, which are drying at the moment. Any help please? Thank you in advance!" |-| "Hi there! Do you remember the cream white Cortinarius I've posted a while ago? I said I'd go back that weekend, but it became a tad later and that was a week ago. So let me get back to the point: I was triggered by a post by Andy Overall, which was Cortinarius ochroleucus. He had found very simillar looking Corts, so I posted my collection. Richard Shotbolt and Andy Overall mentioned C. ochroleucus is plausible, though Andy said my specimen were a bit more robust. I've done a taste test and it was tremendously bitter! Just touching the cap with my lips was enough to evoke very strong and longlasting bitterness! The flesh was bitter, but not that strong. So then I started to wonder.. What would Moser say..? I took the Kleine Kryptogamenflora Band II (Moser, 1967). Easily the key lead me to subgenus Myxacium, because of "the viscid cap (when wet) and the bitter taste". From the subkey of Myxacium the first step directed me to section Ochroleuci, with "small to medium sized mushrooms which has a bitter taste atleast in the cap cuticle. Cap should be blueish, white, ochre to yellowbrown. Stipe and often quite dry, but in humid weather, rather sticky." From the subkey it starts off with cap colour (in this case: ochre-ish, yellow-ish, brown or white), followed by the stickyness or viscidity of the stipe when humid (here just sticky). The cap is white or white-ish, not ochre or chocolate brown, so indeed it keyed out on C. ochroleucus! Now with Nico Dam's key on Dutch Cortinarius in Coolia 54:4 (2011), it keys out either C. eburneus, C. emollitus or C. emollitoides (leaving out the microscopic features, since I could not check them). Looking at photo's and descriptions of C. eburneus, it is quite easy to tell it we can leave that species out. Checking out C. emollitus on the Distribution Atlas of Fungi (DAF) by the Dutch Mycological Society (verspreidingsatlas.nl, 2014), I found a very simillar photo, with specimen that were as 'robust' as mine (http://www.verspreidingsatlas.nl/foto/91... ; http://www.padstoel.nl/webplaatjes/h_ble...). Cortinarius emollitoides and C. ochroleucus are both mentioned on the page of C. emollitoides on the DAF, as they are still unsure about the taxon C. ochroleucus. They mentioned the difference was bitter and non-bitter flesh (resp. C. ochroleucus and C. emollitoides). Cortinarius ochroleucus is not mentioned in Nico's key. So here we are. We have C. emollitus and C. ochroleucus as two candidates. Based on the photo's and description, I'd go for C. emollitus. But then there is also C. barbatus (formerly C. cristallinus)... HELP?!" |-| "And we have a name! Nico has indentified the mysteryCort as: Cortinarius barbatus sensu Funga Nordica (which is C. emollitus 'sensu Dam'). Though, he aswell mentioned this group is still under construction, since both C. barbatus and C. emollitus are seperate species in our Dutch Standard List. The main difference between the two would be the bitterness of the flesh, if they turn out to be two distinct species. So, problem solved... or is it? ||