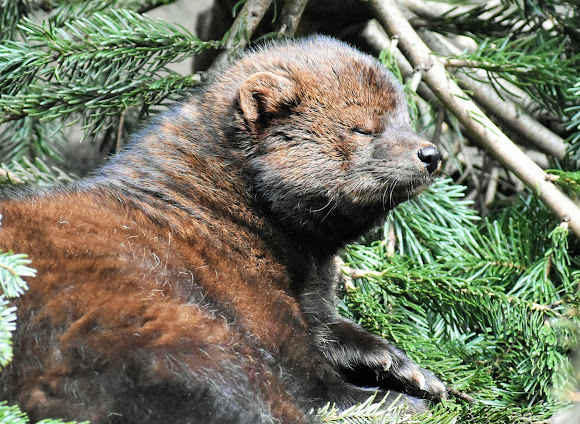 Fishers are a medium-sized mammal that is carnivorous. The sexes have similar physical features, but they are sexually dimorphic in size, with the male being much larger than the female. The fisher's fur changes with the season and differs slightly between sexes. Males have coarser coats than females. In the early winter, the coats are dense and glossy, ranging from 30 mm (1 in) on the chest to 70 mm (3 in) on the back. The color ranges from deep brown to black, although it appears to be much blacker in the winter when contrasted with white snow. From the face to the shoulders, fur can be hoary-gold or silver due to tricolored guard hairs. The underside of a fisher is almost completely brown except for randomly placed patches of white or cream-colored fur. with unsheathed, retractable claws. Their feet are large, making it easier for them to move on top of snow packs. In addition to the toes, four central pads are on each foot. On the hind paws are coarse hairs that grow between the pads and the toes, giving them added traction when walking on slippery surfaces. Fishers have highly mobile ankle joints that can rotate their hind paws almost 180°, allowing them to maneuver well in trees and climb down head-first. The fisher is one of relatively few mammalian species with the ability to descend trees head-first.

Spotted in an exhibit at the Northwest Trek Wildlife Park. Although fishers are competent tree climbers, they spend most of their time on the forest floor and prefer continuous forest to other habitats. They have been found in extensive conifer forests typical of the boreal forest, but are also common in mixed-hardwood and conifer forests. Fishers prefer areas with continuous overhead cover with greater than 80% coverage and avoid areas with less than 50% coverage. Fishers are more likely to be found in old-growth forests. Since female fishers require moderately large trees for denning, forests that have been heavily logged and have extensive second growth appears to be unsuitable for their needs.

Fishers are an endangered species here in Washington. The Northwest Trek Wildlife Park has been working wildlife agencies and state biologist since 2010 - reintroducing the species back into the wild.

Thank you maplemoth, Christine and Zlatan.

Wow, Brian, great spotting and great notes. Thanks for sharing.

Great spotting! Fishers have had to be reintroduced in northwestern CT as well. We have a healthy population now, I think, but I don't see them very often. They are so elusive!

This Fisher, has very beautiful fur....