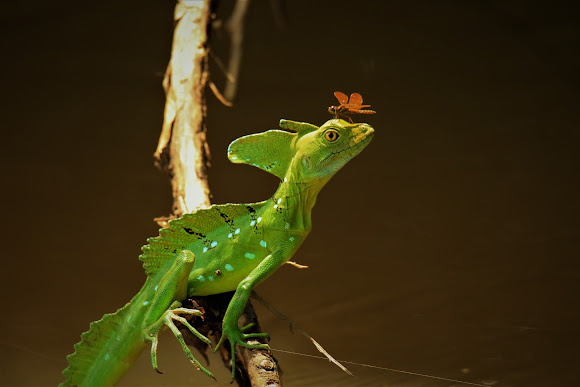 This is a medium size reptile, about 1 meter in length the biggest, (the tail is about 2/3), Is only found in Central America, from Honduras to north-west of Panama. The males of this species, develops a crest along the back and on their head. These lizards have the ability to walk on water, which is why they are sometimes called "lizards Jesus Christ." This ability is due to the presence of folds of the skin along the digits, which, when making contact with the water, open like ailerons and allow, for fractions of a second, the weight of the lizard to be held on the surface of the Water. They also have the characteristic of being optional bipeds, because when they run they lift the anterior half of the body, so that they end up running on the hind legs. Another characteristic of this lizard is a light blue dots throughout the body; from the sides to the belly and the jowls the green color gradually changes to yellow. The female is similar, but does not show great crest development.

Emerald basilisks are omnivorous, they feed on insects, small mammals such as rodents, and even some smaller species of lizards. Their diet also includes fruits and flowers. Their most common predators are birds of prey, opossums and snakes. Notice a dragonfly on the lizards head, it could easily be a snack for the basilisk.

Fantastic series Jonathan,congrats on the well deserved SOTW and thanks for sharing

Congratulations Jonathan! On the PN Facebook post someone is asking a question similar to mine below regarding the dragonfly drinking from the eyes. You want want to check it out. Here's a link to the post:
https://www.facebook.com/projectnoah/pho...

Thanks a lot. I hope you all enjoy this spooting as much as I do

Congratulations, Jonathan, this spotting has been voted Spotting of the Week!

Thanks for your reply Jonathan!

Hi Daniele, I know dragonflies can drink water and obtain liquids from. What they eat, but I am not sure about liquids or posible minerals from reptiles, but it is a possibility.

Great catch Jonathan! Do you happen to know whether dragonflies drink from reptile tears, as butterflies do?

Congrats on nomination!! Best of luck!!

Beautiful and informative spotting - thanks Jonathan !

That's right Mark I forgot to mention the dragonfly, I just edited and add a little on the notes, actually, long ago I saw a basilisk that try to catch a dragonfly at the time that the lizard was running on top of the water.

Yes Ava. It is a dragon fly on the head. Thanks for all your comments.