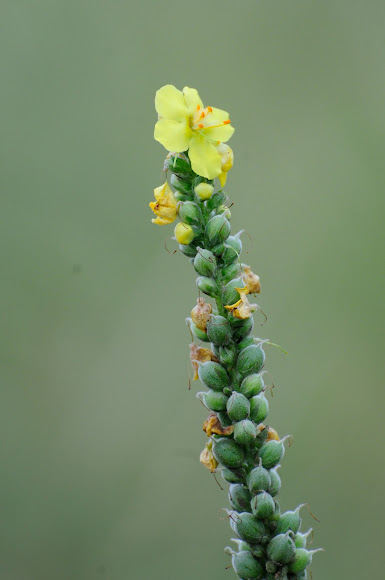 Hairy biennial plant that can grow up to 2 m tall. Its small yellow flowers are densely grouped on a tall stem, which bolts from a large rosette of leaves. It is a common weedy plant that spreads by seeds, but rarely becomes aggressively invasive, since it require open ground to germinate. It is not a very competitive species, being intolerant of shade from other plants and unable to survive tilling. It also hosts many insects, some of which can be harmful to other plants. It is widely used for herbal remedies with emollient and astringent properties. It is especially recommended for coughs and related problems, but also used in topical applications against a variety of skin problems. The plant was also used to make dyes and torches.

It grows in a wide variety of habitats, but prefers well-lit disturbed soils, where it can appear soon after the ground receives light, from long-lived seeds that persist in the soil seed bank.