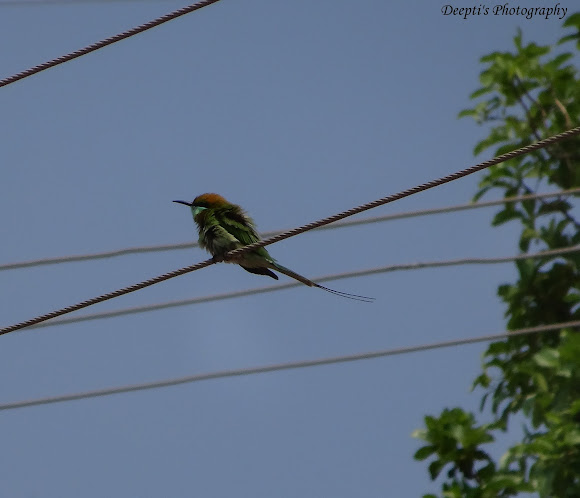 'Green Bee-Eater' is about 9 inches long with about 2 inches made up by the elongated central tail-feathers. The entire plumage is green and tinged with blue especially on the chin and throat. The crown and upper back are tinged with golden rufous. The flight feathers are rufous washed with green and tipped with blackish. A fine black line runs in front of and behind the eye. The iris is crimson and the bill is black while the legs are dark grey. The feet are weak with the three toes joined at the base. Southeast Asian birds have rufous crown and face, and green underparts, whereas Arabian birds has a green crown, blue face and bluish underparts.

Green Bee-Eaters predominantly eat insects, especially bees, wasps and ants, which are caught in the air by sorties from an open perch. Before swallowing prey, a bee-eater removes stings and breaks the exoskeleton of the prey by repeatedly thrashing it on the perch. Like most other birds they regurgitate the hard parts of their prey as pellets. Unlike many bee-eaters, these are often solitary nesters, making a tunnel in a sandy bank. The breeding pairs are often joined by helpers. They nest in hollows in vertical mud banks. The nest tunnel that they construct can run as much as 5 feet long and the 3-5 eggs are laid on the bare ground in the cavity at the end of the tunnel.