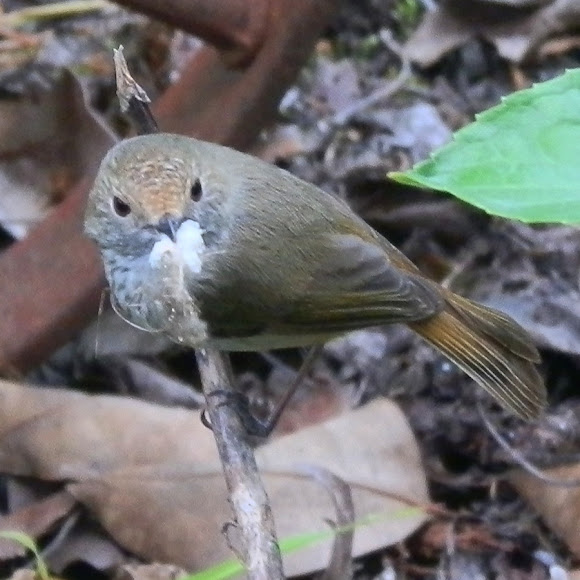 A small bird with dark beady eyes and small sharp bill. The head and tail feathers were a reddish-brown and the body was a greenish-grey. The pale throat and chest had tiny grey flecks.

Spotted in a garden in a farm. These birds are common in scrub lands, woodlands and waterways but only in eastern and south-eastern Australia including Tasmania.

Thornbills live on insects and occasionally will feed on seeds and nectar. They nest low in grass and bushes and are therefore at risk from fires and domestic cats,
This little thornbill was so still for so long that I assumed it was a garden ornament. It turned its head slowly when I approached it but continued to sit still. It had a bit of white fluff like a feather in its bill.
Order: Passeriformes
Family: Acanthizidae

Nice story about mistaking it for a garden ornament!

Today seems to be my day to see newbirds(2),mammal (1) and even one butterfly. This bird though not brightly coloured seems to have personality! Thanks for sharing.