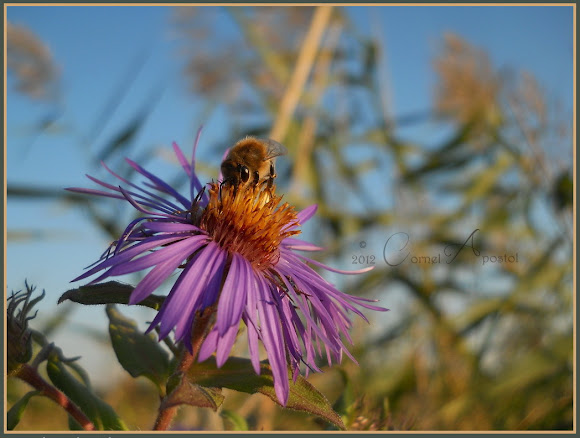 The honey bee is a colonial insect that is often maintained, fed, and transported by beekeepers. Honey bees do not survive individually, but rather as part of the colony. Reproduction is also accomplished at the colony level. Colonies are often referred to as superorganisms. Honey bees collect flower nectar and convert it to honey which is stored in their hives. The nectar is transported in the stomach of the bees, and is converted to honey through the addition of various digestive enzymes, and by being stored in a "honey cell" and then partially dehydrated. Nectar and honey provide the energy for the bees' flight muscles and for heating the hive during the winter period. Honey bees also collect pollen which supplies protein and fat for bee brood to grow. Centuries of selective breeding by humans have created honey bees that produce far more honey than the colony needs. Beekeepers, also known as "apiarists," harvest the honey.(Wikipedia)

The western honey bee is native to the continents of Europe, Asia, and Africa. (Wikipedia)