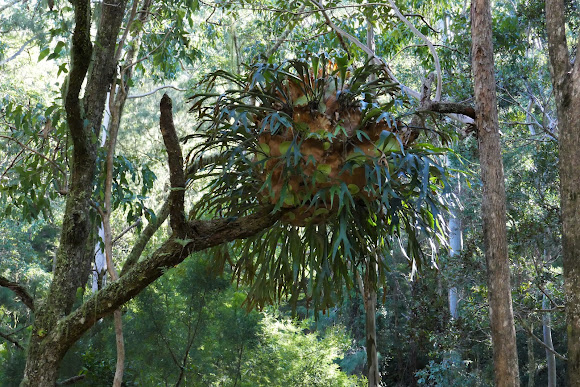 Platycerium bifurcatum, commonly known as the "elkhorn fern", is a bracket epiphyte and occurs naturally in tropical and subtropical rainforests. It is native to Java, New Guinea and southeastern Australia, in New South Wales, Queensland and on Lord Howe Island. This spotting caught my eye because if its sheer size as a massive cluster (first photo). The second photo shows another massive cluster, although almost completely dead with the exception of a couple of smaller individual plants. The second spotting was in a much drier location, being higher on the ridge and more sunlight due to thinner canopy. Whether this is the cause of its demise is unknown to me. PS: If I have misidentified this spotting, please let me know. Also, despite saying "403 Forbidden", the second reference link does work.

Along the North Branch Trail in subtropical rainforest. This area is known as the "Goomburra Section" of Main Range National Park. The park forms part of the Gondwana Rainforests of Australia World Heritage Area. This spotting is most likely attached to a bloodwood tree. Mountain she-oak is also a favourite host, as is the case in the second photo. Dappled light due to dense forest canopy, although some areas are drier and upper foliage thinner up towards the ridges and higher locations.

Staghorn or elkhorn? The difference between these two plants is the elkhorn (Platycerium bifurcatum) has thinner, whispier leaves and multiple “eyes” or rosettes of foliage, whereas the staghorn (Platycerium superbum – pronounced superb-um) has a single eye and larger leaves. These two species are now very popular as cultivated plants. Both P. superbum and P. bifurcatum are the only two species of the genus Platycerium that have been documented in Main Range National Park. Catergory Ferns - Polypodiaceae - Platycerium https://wetlandinfo.ehp.qld.gov.au/wetla...