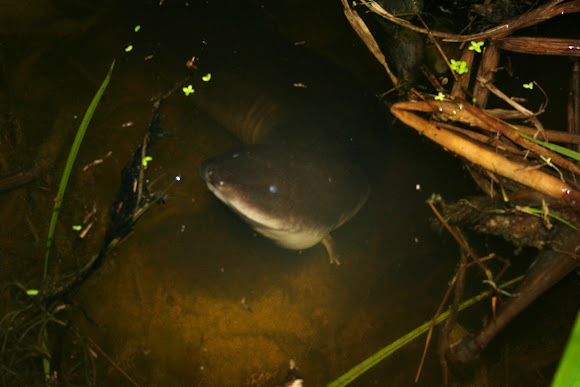 These elongated salamanders may reach more than three feet (.9 m) in length. They are permanently aquatic, although the adults lack gills and use lungs to breathe air. The skin is very smooth and extremely slippery. Both forelimbs and hindlimbs are highly reduced in size and appear nonfunctional. They swim and move with snake-like undulations of their bodies. Larvae hatch with external gills and transform partially, losing the gills but retaining one pair of gill slits. Amphiumas are nocturnal and retreat into burrows during the day. Some animals forage by sticking only their head and upper body from their burrow.

They range from western Alabama to eastern Texas, and north through the Mississippi Valley to the southeastern portion of Missouri. This salamander prefers permanent or semi-permanent aquatic habitats with abundant vegetation. They inhabit lakes, marshes, sluggish streams, swamps, bayous, and drainage ditches.

DIET IN THE WILD: They hunt prey items such as earthworms, crayfish, fish, insects, mollusks, snakes, tadpoles, frogs, and smaller amphiumas in the dark, night waters. REPRODUCTION: Breeding occurs underwater in the winter or spring. Reportedly, several females court a single male by rubbing their snouts along his body. Finally, one female enters into a mutual embrace with the male, and a spermatophore is transferred directly from the male’s cloaca into the female’s. Eggs are about .35 inches (9 mm) in diameter and may number up to 200. A string of eggs is laid in a depression in the mud under a log or other covered objects. Females coil around their egg masses for the duration of development, which takes about five months. LIFE SPAN: Amphiumas reach their teens in zoos. The life span record for a two-toed amphiuma is 27 years. STATUS: They are neither threatened nor endangered. They are fairly flexible in the sorts of aquatic habitats they occupy and have adapted to man-made watercourses. However the increasing destruction of wetland habitats is a potential threat to many populations. Fishermen detest them because they mistakenly believe amphiumas prey on virtually anything that swims and because they have been known to bite.

not is an eel have little legs

I don't know what I was thinking, I completely forgot the Amphiuma! Sorry for the false ID I had up!