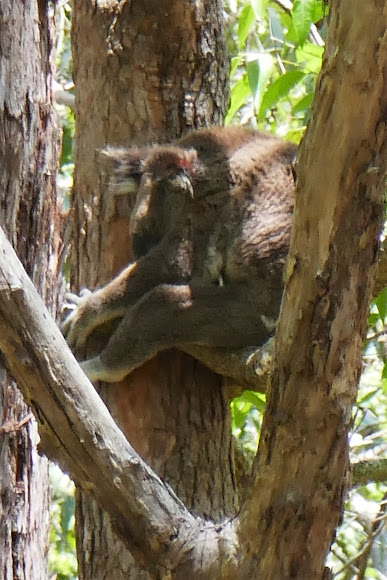 It is always an exciting experience to see wild koalas, and on this particular walk, three were spotted*, although I could only see two. The fact that I was on the "Toohey Forest Koala Walk" organised by Griffith University Art Museum is beside the point. I actually learned quite a bit, and most importantly, where to look for them because they aren't always up in the canopy. These koalas were all tucked away in the dense understory of smaller trees, sheltered from the sun and heat, and not easy to spot with an untrained eye! *PS: The guide actually posted photos of a fourth koala, a large independent joey of the female I couldn't see. That shows the importance of dense foliage for the protection and shelter of the animals.

Wet sclerophyll forest in the riparian zone along a creek course. The area was well-shaded with dense undergrowth. Toohey Forest is a remnant eucalyptus woodland reserve of approximately 655 hectares. The forest is situated within an urban area on the south side of Brisbane, within the city limits. https://news.griffith.edu.au/2019/09/19/...

One thing I find interesting is the koala diet, particularly their preference for certain food trees in their various areas. In this forest there are several favourite food tree species, but their selection of trees will vary over time. Tallowwood (Eucalyptus microcorys) and grey gum (Eucalyptus sp.) are current favourites, but they are also known to eat leaves from the spotted gum (Corymbia maculata). However, this species isn't being eaten at present, most likely due to conditions being so dry and perhaps less moisture in the leaves than in other species. It's a good backup supply though. The bacterial flora in the gut of koalas is different depending on their location and food trees. I've often thought that koalas could easily be relocated to areas where numbers were dwindling or had become locally extinct, but it's not that simple. Not all koalas will favour all recognised food trees. There are over 600 types of eucalypts in Australia, but koalas will only eat 40-50 varieties with only about 10 being preferred. Within a particular area, as few as one, and generally no more than two or three species of eucalypt will be regularly browsed while a variety of other species, including some non-eucalypts, appear to be browsed occasionally or used for just sitting or sleeping in. Different species of eucalypts grow in different parts of Australia, so a koala in Victoria would have a very different diet from one in Queensland. Some populations may prefer forest red gums (Eucalyptus tereticornis) due to abundant growth, whereas others may rely on Sydney blue gums (Eucalyptus saligna), but not all species are found everywhere. Koalas like a change too, and sometimes they will eat from other trees such as wattle or tea tree. Before any relocation occurs, scat is now examined to determine plant DNA and specific gut flora which helps digest different species of plants. That's not to say that relocation can't occur, but is now done with great care and consideration for the animal and environment. Having said all that, here's a good general guide for koala food trees in SEQ - https://wildcare.org.au/Documents/koalas... Local preferences will vary.

Thanks, Brian. I love spotting koalas, and it's never that easy. I haven't been around much lately so have a bit of catching up to do with everyone's recent spottings.