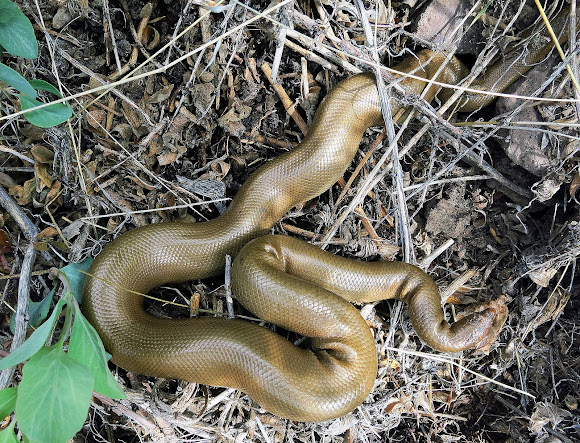 Rubber Boas are one of the smaller boa species, adults can be anywhere from 15 to 33 inches (840 mm) long; and newborns are typically 7.5 to 9 inches (230 mm) long. The common name is derived from their skin which is often loose and wrinkled and consists of small scales that are smooth and shiny, these characteristics give the snakes a rubber like look and texture. Colors are typically tan to dark brown with a lighter ventral surface but sometimes olive-green, yellow, or orange. Newborns often appear pink and slightly transparent but darken with age. Rubber boas have small eyes with vertically elliptical pupils and short blunt heads that are no wider than the body. One of the most identifiable characteristics of Rubber Boas is their short blunt tails that closely resemble the shape of their head.

Rubber Boas have been known to inhabit a wide variety of habitat types from grassland, meadows and chaparral to deciduous and conifer forests, to high alpine settings. They can be found at elevations anywhere from sea level to over 10,000 feet (3,000 m). They are not as tolerant of higher temperatures as other snake species and cannot inhabit areas that are too hot and dry, but can live in areas that are surprisingly cold, especially for a snake. Rubber Boas also spend a large amount of time under shelter (rocks, logs, leaf litter, burrows, etc.) and thus must live in habitats that can provide this, as well as adequate warmth, moisture, and prey. It is also thought that Rubber Boas maintain a relatively small home range as many individuals are often captured in the same vicinity year after year, although individuals may occasionally migrate due to competition, lack of prey, or other pressures.

Interestingly, we found this boa at about 8,000 feet in the White Cloud Mountains of Idaho. Having found many, this was by far the largest I'd ever seen. Sam had never touched a snake before. These are fun because most people are oblivious to the fact that the Northwest has a native boa.