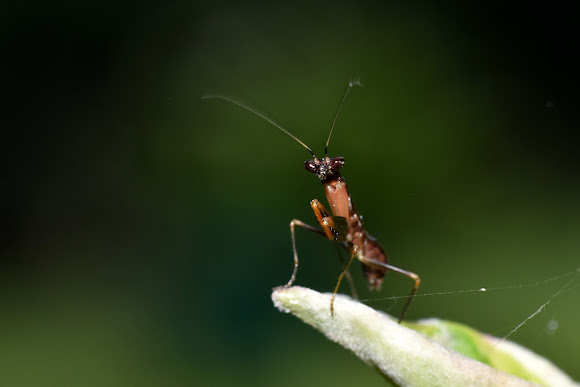 Myrmecomantis atra the mimicry artist Ants are the terrors of the insect world and most avoid them at all cost. So, looking like an ant can often save an insect from predation. Not just that, the ant-like appearance can help an insect go unnoticed amongst other ants and some insects take advantage of that to eat the ants which give them protection! Here's an Ant Mantis - a species of Praying Mantis which looks like an ant and acts like one except that it could catch and eat up a passing ant. This mantis lives to mimic ants, fire ants to be specific. The nymphs are incredibly fun to raise as they look exactly like ants, all the way down to the mandibles. As they get older, they gradually lose their bright red coloring and begin to sport green and brown markings. The mature adults are green in color and look nothing like ants. Females have small black and orange markings at the end of the wings and males have dark coloring along the entire wing. Many types of insects mimic ants, from phasmids to katydid, spiders, flies, beetles and praying mantis. Insects mimic ants as a protective mechanism, a form of Batesian mimicry. Birds and other large insects tend to avoid ants as prey as they tend to be aggressive or unpleasant to taste. Ant Mimicry is called ‘myrmecomorphy’ which comes from two words myrmex (meaning ant) and morphos (meaning form). Occasional some insects mimic ants to be able to prey on ants.

Ant mimicry or myrmecomorphy is mimicry of ants by other organisms. Ants are abundant all over the world, and potential predators that rely on vision to identify their prey, such as birds and wasps, normally avoid them, because they are either unpalatable or aggressive. Some arthropods mimic ants to escape predation (protective mimicry), while others mimic ants anatomically and behaviourally to hunt ants. To overcome ants' powerful defences, mimics may imitate ants chemically (Wasmannian mimicry) with ant-like pheromones, visually (as in Batesian mimicry, though the purpose may also be aggressive mimicry), or by copying microstructure for tactile mimicry.

Recently observed one such myrmecomorphy – the Asian Ant Mantis (Odontomantis planiceps), also called the Grass Mantis. As can be realised from the name, this praying mantis is recognized to practice myrmecomorphy. The instar (nymph) of this praying mantis can easily be mistaken as a large ant until you clearly see the front two legs. This filed study done at Hyderabad state means Telanaga, India the particular location this species found at NARSAPUR, 30 Km to hyderabad, India.

Thanks for sharing this wonderful spotting and information.

But really its very hard to reach this tiny insect they have very very good vision.

Then I got a chance to see this lovely insect in Telangana State, India, I have done a lot of research on this species I tried to get Secondary data also but in Wikipedia either in anywhere there is no particular information about this species, so I started my own research after three months I got wonderful data and photographs of this tiny insect which I have posted here.

This field study done at Hyderabad District means in Telangana State, India the particular location of this species found at NARSAPUR forest Patch, 20 - 30 Km from Hyderabad, India. I am really honored by your all support. just I am a Nature Lover one on the story writer in WIKIPEDIA on Wildlife Fauna & Flore but today I am very happy "Project Noah" and you all Admin Team gave me a wonderful chance to post my photographs with the relevant script here.

What an interesting spotting!

Your spotting has been nominated for the Spotting of the Week. The winner will be chosen by the Project Noah Rangers based on a combination of factors including: uniqueness of the shot, status of the organism (for example, rare or endangered), quality of the information provided in the habitat and description sections. There is a subjective element, of course; the spotting with the highest number of Ranger votes is chosen. Congratulations on being nominated Shiva!

This is a great series! One tip for you Shiva: under Habitat, as per our guidelines please simply describe the actual habitat where the spotting was made. Also, for published information you can use the Reference fields, and use the Description field to provide more of your own observations.Thanks in advance!
http://www.projectnoah.org/faq