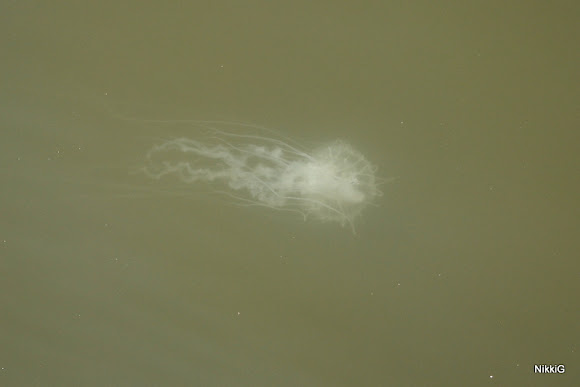 The “jellies” often encountered in the Chesapeake Bay in the summer, which can bring painful stings, are the sea nettle Chrysaora quinquecirrha. This sea nettle is white and occurs most abundantly in the tributaries of the middle Bay, where salinities range from 10 to 20 parts per thousand. In the southern Bay, it often has red/maroon markings on the long central tentacles and on the swimming bell. C. quinquecirrha occurs from Cape Cod south along the U.S. East Coast, Caribbean, and Gulf of Mexico, but it abounds in the Chesapeake Bay in numbers unequaled elsewhere.

Saw many of these swimming near the dock at the Chesapeake Bay Maritime Museum.