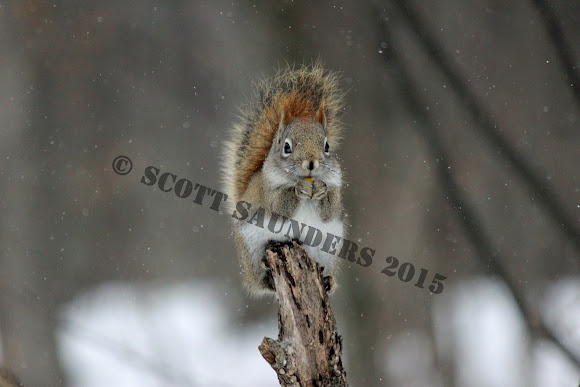 Red squirrels can be easily identified from other North American tree squirrels by their smaller size, territorial behavior and reddish fur with a white venter (underbelly).[6] Red squirrels are somewhat larger than chipmunks. The Douglas squirrel is morphologically similar to the American red squirrels, but has a rust-colored venter and is restricted to the southwestern coast of British Columbia and in the Pacific Northwest of the United States. These species' ranges do not overlap

American red squirrels are widely distributed across the North American continent. Their range includes most of Canada, the southern part of Alaska, coastal British Columbia, and the Rocky Mountains and boreal forests east to the Atlantic coast.[6][7] American red squirrels are abundant and not of conservation concern throughout much of their range. However, an isolated population of red squirrels in Arizona has experienced considerable declines in population size. In 1987, this portion of the population was listed as an endangered species

What a great photo! You probably shouldn't put fox squirrel in the common name box for this species, fox squirrel is the common name for something pretty different from this little cutie! These guys are commonly known as red squirrels like your description indicates. It's also not the best idea to copyright information from other sites without siting them. We have reference boxes for that! Just put the link in the reference box, then put in a description in your own words and the habitat section should be where you saw this individual at, not generalities about the whole species :)