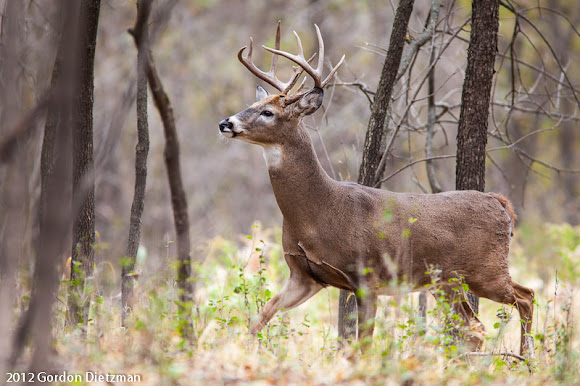 White-tailed deer have a wide range across much of the US and Canada, in a number of different habitats. They tend to avoid large open areas and are most often found in brushy forests and along tree-lined rivers in grasslands. Increasing numbers are found in suburban parks and mature wooded yards.

This is the time of the year when the white-tails go into rut, their breeding season. Bucks are still fairly docile with each other right now--I've not seen any skirmishes yet--but it won't be long before they will be fighting for dominance. This particular buck seemed interested in a doe that he was following and somewhat cautious as there was another buck in the area. As a result, he was very alert as he stalked past me. Later, I ran into this buck again. He was slowly walking towards me and then bedded down about 20 meters away (second and third photos).