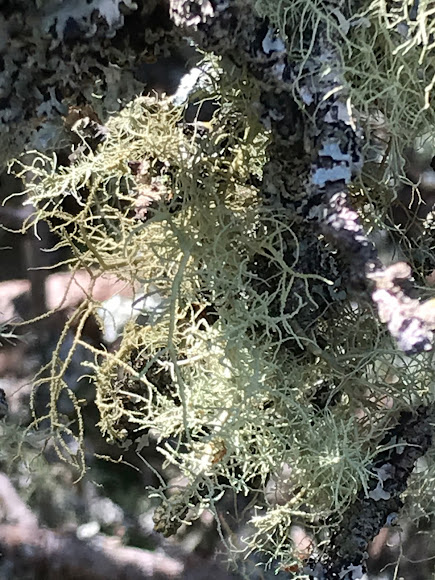 Light grayish green fruticose lichens that grow like leafless mini-shrubs or tassels anchored on bark or twigs. Like other lichens it is a symbiosis of a fungus and an alga. In Usnea, the fungus belongs to the division Ascomycota, while the alga is a member of the division Chlorophyta.

In forest near the marches and the Atlantic. Nova Scotia, Canada. Old Man’s Beard is frequently found in clean, moist environments such as boggy woods. Though it prefers to cling to coniferous trees in old growth forests, it also hangs from the younger birches. Sensitive to air pollution, it’s often found with other types of lichens, such as the foliose lichens.

Canada’s native people harvested Old Man’s Beard long ago and added it to their diet. It can be steamed or dried and pummeled into a powder. A strong antibiotic, it was also used to prevent infection and gangrene from setting into external wounds. A thousand years ago, Old Man’s Beard was already being used as a medicine to treat lung cancer. It’s still used today as a treatment for tuberculosis in China as it contains usnic acid. The antibiotic properties of Old Man’s Beard make it an effective treatment for fish infections in ponds and aquariums. Yellow warblers seek forests where the Beard is present as they consider it an indispensable construction material in building their nests. A french fairy tale, LA BARBE DE NAIN by Marcelle Vérité, explains that the beards once belonged to elves. Long ago, it was customary for these kind, cheerful creatures to arrange bundles of deadwood on the forest floor as a gift for mankind. But when men greedily began to cut down live trees, the elves hastily fled to remote mountain peaks, snagging their beards on branches in the process. The lost beards can be found in forests to this day.