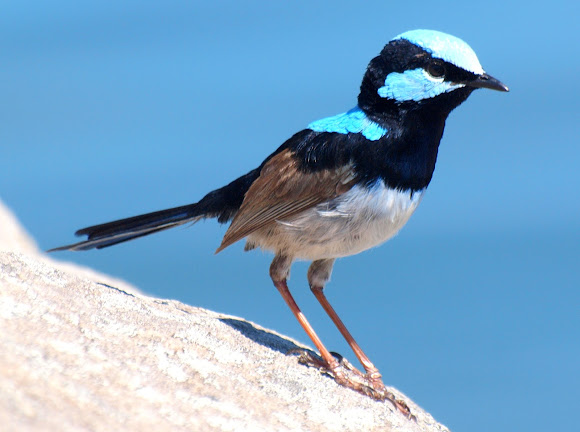 Adult male Superb Fairy-wrens are among the most brightly coloured of the species, especially during the breeding season. They have rich blue and black plumage above and on the throat. The belly is grey-white and the bill is black. Females and young birds are mostly brown above with a dull red-orange area around the eye and a brown bill. Females have a pale greenish gloss, absent in young birds, on the otherwise brown tail. The legs are brown in both sexes. Males from further inland and in the south-west of the range have more blue on the back and underparts.

Seen in most habitat types where suitable dense cover and low shrubs occur. They are common in urban parks and gardens, and can be seen in small social groups. These groups normally consist of one dominant male and several females and young birds.

Feeding: Superb Fairy-wrens feed on insects and other small arthropods. These are caught mostly on the ground, but may also be taken from low bushes. Feeding takes place in small social groups. Breeding: The nest is a dome-shaped structure of grasses and other fine material. It is usually placed in a low bush and is constructed by the female. The female incubates the eggs alone, but both sexes feed the young. Other members of the group will also help with the feeding of the young.