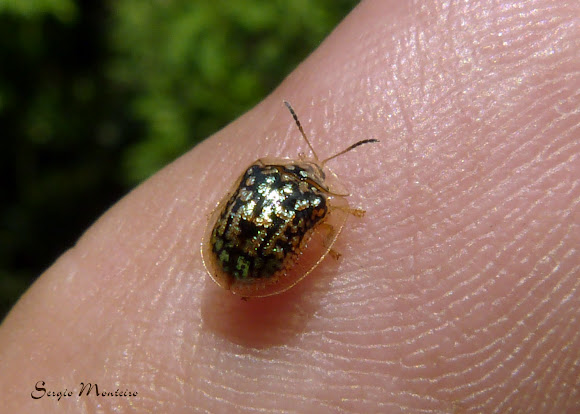 Saved from a spider's web, to pay the favor it agreed to let me take some pics!

The tortoise beetles are an artificial grouping of tribes within the leaf beetle subfamily Hispinae. In past classifications, they have been variously placed as a family ("Cassidae") or a subfamily (Cassidinae); when it was recognized that this group was not monophyletic, it was split and the resulting tribes were incorporated into the Hispinae. Some of the tribes that are considered "tortoise beetles" in the historic sense are the Cassidini, Dorynotini, Hemisphaerotini, Ischyrosonychini, and Mesomphaliini. Their common name arose from the superficial resemblance some species bear to tortoises, the elytra being analogised with the tortoise's carapace. Some species are easily mistaken by non-entomologists as ladybugs/ladybirds. (Wikipedia)

I love these! They look like little space ship bugs. LOL