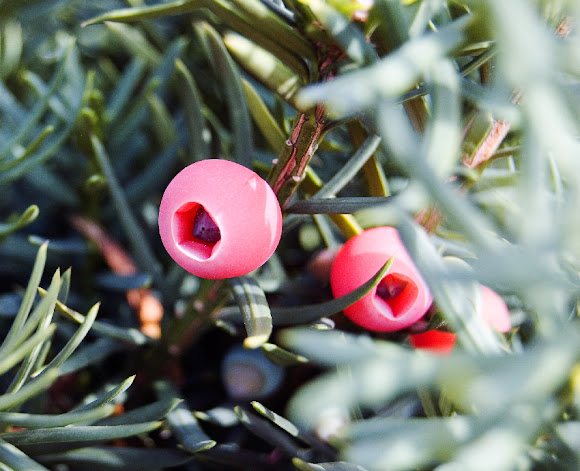 The European Yew is a small to medium sized conifer growing between 10-20 metres (33-66 ft) in height. The leaves are dark green, flat and arranged with a slightly spiraled twist in two rows on either side of the stem. During the late summer and well into the autumn the yew grows bright pink and red fleshy barrel shaped berries that each contain a single seed buried in their center.

While the European Yew is native to western, central and southern Europe, northwest Africa, northern Iran, and southwest Asia, the conifer is also popular across southern Canada and the northern portion of the United States in decorative landscaping as ornamental hedges and as natural privacy fences due to its thickness and manageable size.

The flesh of the berries, called an "aril", are edible but all other parts of the plant (seeds, bark, roots and leaves) are extremely toxic to mammals causing death if eaten. While poisonous to mammals, some birds species such as hawfinches, greenfinches and great tits include the seeds as part of their diets.