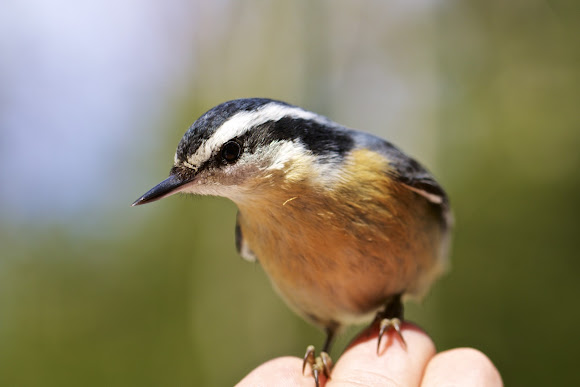 The adult has blue-grey upperparts with cinnamon underparts, a white throat and face with a black stripe through the eyes, a straight grey bill and a black crown. Its call, which has been likened to a tin trumpet, is high-pitched and nasal. It breeds in coniferous forests across Canada, Alaska and the northeastern and western United States. Though often a permanent resident, it regularly irrupts further south if its food supply fails. There are records of vagrants occurring as far south as the Gulf Coast and northern Mexico. It forages on the trunks and large branches of trees, often descending head first, sometimes catching insects in flight. It eats mainly insects and seeds, especially from conifers. It excavates its nest in dead wood, often close to the ground, smearing the entrance with pitch.

Though it is primarily a full-time resident of northern and subalpine conifer forests, the red-breasted nuthatch regularly migrates irruptively, with both the number migrating and the wintering locations varying from year to year. They sometimes reach northern Mexico, where they are rare winter visitors to Nuevo Leon, Baja California Norte and south along the Pacific slope as far as Sinaloa. In the eastern United States, its range is expanding southwards. Though formerly resident on Isla Guadalupe, an island off the western coast of Mexico, it appears to have been extirpated there, with the last known record of the species on the island dating from 1971. There is a single vagrant record for Mexico's Isla Socorro. It is an extremely rare vagrant to Europe, with two records in the western Palearctic; one bird successfully overwintered in eastern England.

I'm amazed to see this bird sitting on your hand! I have some that come to the feeder and they hardly stay still long enough for me to get a photo! Well done.

Here in Quebec birds are really not shy. People use feed them with seeds to make them come closer. And finally, birds sit on hands, even without seeds. Really nice moment !

How did you get him to sit on your finger? Remarkable detail of the plumage.