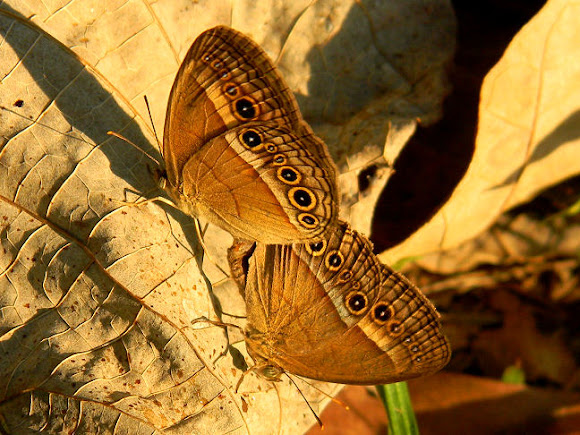 A pair of mating orange bush-brown butterflies. Mycalesis terminus is found in The Moluccas and Papua (Indonesia), Papua New Guinea and surrounding islands, and in the Cape York peninsula of Australia. "The species can be recognized by striking markings on the upper fore wing: the orange-brown ground color is bordered by the broadly dark costa and termen and contrasts with a quadrate orange-yellow patch surrounding a black subterminal eyespot. The upper hind wing is orange-brown and features 3-4 subterminal eyespots. The ground color of the wing undersides is brown. Both the fore and hind wing have numerous eyespots aligned on a light-colored band that is bordered proximally by a dark transverse line and distally by brown terminal and subterminal lines (Braby 2000)."

This spotting occurred on the campus of a school which is nestled in the foothills of the Cyclops mountains. The campus is surrounded by villages, gardens and disturbed forest.