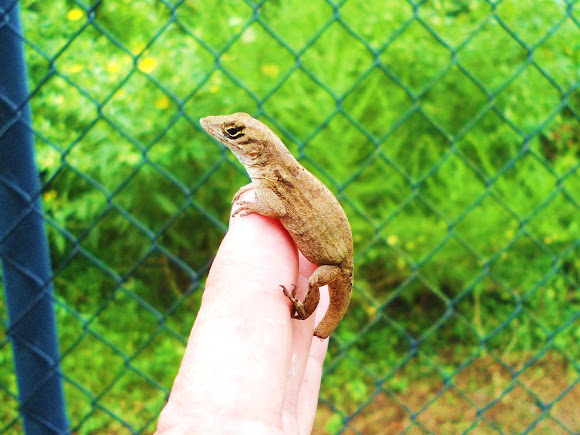 The brown anole (Anolis sagrei) is a lizard native to Cuba and the Bahamas. It has been widely introduced elsewhere, by being sold as a pet lizard, and is now found in Florida and as far north as southern Georgia, Texas, Taiwan, Hawaii, Southern California, and other Caribbean islands. This species is highly invasive. In its introduced range, it reaches exceptionally high population densities, is capable of expanding its range at an exponential rate,[dubious – discuss] and both outcompetes and consumes many species of native lizards. Its introduction in the United States has altered the behavior and triggered a negative effect on populations of the native Carolina anole (Anolis carolinensis).

As a defense mechanism, brown anoles can detach most of their tails when pursued or captured. The piece that breaks off will continue to move, hopefully distracting the predator and allowing the anole to escape. The lost tail will partially regrow. Unfortunately, this one had a mutated tail & as careful as I was, it still came off.