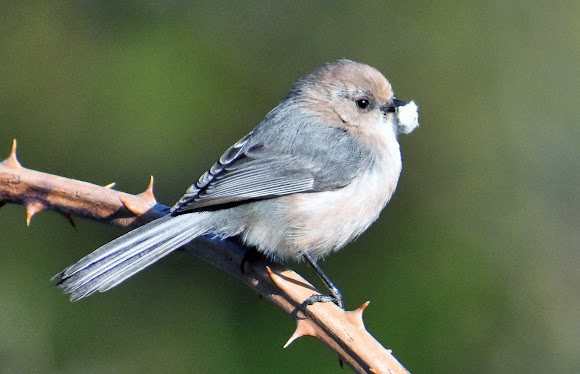 Bushtits are somewhat plump with round heads. Gray upperparts and whitish underparts. Their cheeks and crown are tan - this is variable depending on location. Seen here with some nest building material.

Spotted along the BPA trail near Celebration Park in Federal Way, Wa. It is a year-round resident of the western United States and highland parts of Mexico, ranging from Vancouver through the Great Basin and the lowlands and foothills of California to southern Mexico and Guatemala.

After winter flocks break up, pairs establish territories but do not defend them strongly, tolerating other Bushtits even near nest. If pairs are disturbed during early stages of nesting, they reportedly may abandon the effort and build a new nest, perhaps with a different mate. Nest site is in a tree or shrub, 8-35' above the ground, sometimes lower or higher. Nest (built by both sexes) is firmly attached to twigs and branches, a tightly woven hanging pocket, up to a foot long; small entrance hole near top leads to narrow passage which opens into nest chamber. Nest is made of spiderwebs, moss, grass, lichens, leaves, rootlets, twigs; inside lined with plant down, animal hair, feathers.

Thank you for commenting DrNamgyalT.Sherpa.