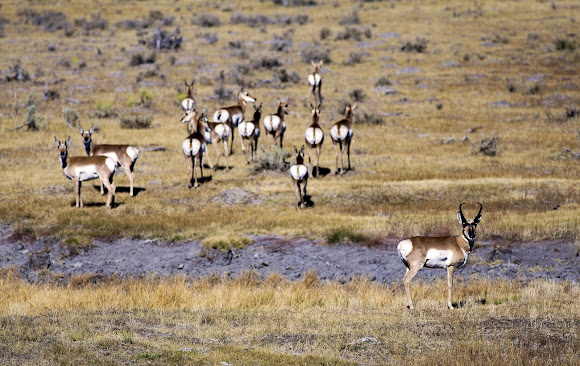 The pronghorn (Antilocapra americana) is a species of artiodactyl mammal endemic to interior western and central North America. Though not an antelope, it is often known colloquially in North America as the prong buck, pronghorn antelope, or simply antelope, as it closely resembles the true antelopes of the Old World and fills a similar ecological niche due to convergent evolution. It is the only surviving member of the family Antilocapridae. During the Pleistocene period, 12 antilocaprid species existed in North America. About five existed when humans entered North America and all but A. americana are now extinct.

Pronghorns live primarily in grasslands but also in brushland and deserts. They eat a wide variety of plant foods, often including plants that are unpalatable or toxic to domestic livestock (sheep and cattle) though they also compete with these for food.

This group was observed in North Central Nevada South of Wildhorse Reservoir.