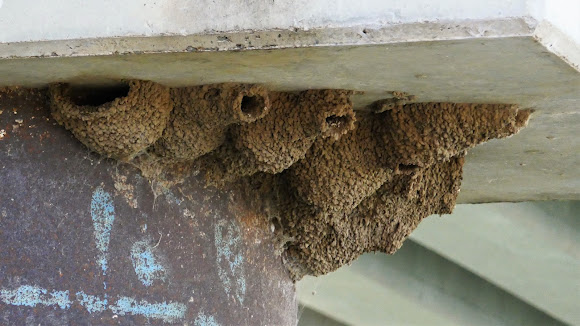 My very first encounter with "fairy martins" (Petrochelidon ariel) and their little mud nests. I thought at first these birds were "welcome swallows", but that turned out not to be the case. Australian natives, this species is a member of the swallow family of passerine birds and also belongs to the family Hirundinidae, hence my first impression. This spotting is of a cluster of fairy martin mud nests beneath a road bridge, and from what I could see, the colony would have been comprised of at least 100 nests, possibly more. They are the most communal of Australian swallows, keeping in tight flocks of a dozen to several hundred birds, but despite their large range, this is considered to be an uncommon species. It has no subspecies, but is frequently placed in the genus Hirundo (as Hirundo ariel). Similar species include the tree martin (Petrochelidon nigricans), although it has different colouration, and the welcome swallow (Hirundo neoxena), but it has a forked tail while the martin's is more squared.

Spotted beneath the Alf Williams Bridge, which crosses the Brisbane River at Gregors Creek. This is a rural farming area. They prefer open country near water, although can also be found in city areas. Nests are usually constructed in natural holes in dead trees, riverbanks, cliff faces or rock crevices, but increasingly in artificial sites on bridges, in culverts and pipes, and on buildings. They are found over the Australian mainland, except for the arid parts of Western Australia and central Cape York Peninsula. Occasionally found in north-east Tasmania, New Guinea, Indonesia, and It is increasingly a wanderer to New Zealand.

These mud nests were amazing, and it was wonderful to watch the birds come and go. The nest is a retort or bottle shaped structure, made from up to 1000 mud pellets and lined with dried grasses and feathers. The bowl is about 15 cm in diameter, and the entrance tunnel is anywhere between 5–30 cm long. The nests in a colony are clustered together. Both sexes build the nest and share incubation and care of the young. I read that nests are often built over water, as was the case with this spotting, but I do wonder what the mortality rate is for young fledgling birds? I'm sure many must fall straight into the river and drown on their first flight. I guess that's one of the downfalls of nesting over water, but the upside is that the colony is quite safe from any potential predators, including snakes. PS: No bridge trolls seen either ;)

Thanks for the nomination, Ashley.

Thanks, Ava. Plenty of mozzies here, particularly now when the water is still and level has dropped.

I bet they also build over water to have a steady supply of bugs like mosquitoes to eat and to feed their young. Wonderful notes and pictures Neil!