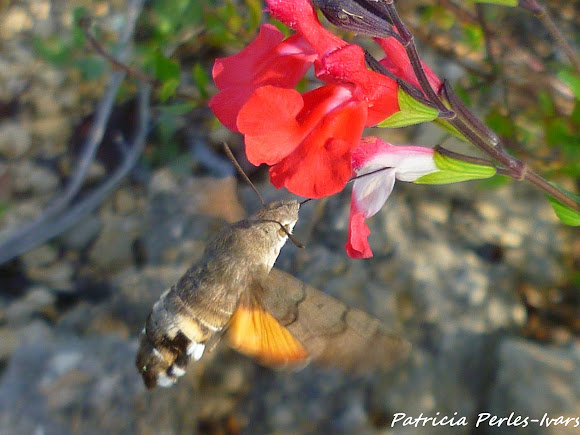 Its long proboscis and its hovering behaviour, accompanied by an audible humming noise, make it look remarkably like a hummingbird while feeding on flowers.(in the pics, feeding on Salvia sp flowers)

These moths can be easily seen in gardens, parks, meadows, bushes and woodland edge, where the preferred food plants grow (Honeysuckle, Red Valerian and many others). The Hummingbird Hawk-moth is distributed throughout the northern Old World from Portugal to Japan, but is resident only in warmer climates (southern Europe, North Africa, and points east). It is a strong flier, dispersing widely and can be found virtually anywhere in the hemisphere in the summer.

Its visual abilities have been much studied, and it has been shown to have a relatively good ability to learn colours.

A new photo uploaded!
as you can see, it leaves its proboscis long before the flower!
I think it's interesting!
(this is a little blurry ... sorry!)

Well done on getting these photos, these are a regular visitor to our garden here in Turkey, but I have never been able to get a decent photo.

yes! so sunny here!
so difficult to take the photo because of the velocity!
:)