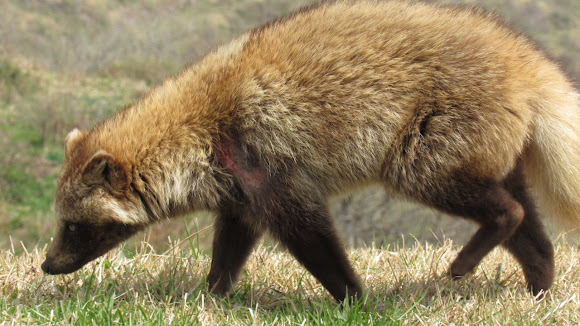 Relatively a small canine about the size of a small dog, originally from China and Japan, this individual was seen in the island of Chiburijima. I notice it was hurt and limping,it was walking close to a trail, not feeling disturbe by my presence. As Eytan continued doing observations He reported to my that they move in small groups, and they are very agile moving in rocky areas where they may hunt for small animals . It is supouse that this kind of dog was introduced in areas of Russia and Europe (Romania, Poland, Germany, Switzerland and France), because of it valuable fur. It is considered one of the most archaic canine species. This specimen was seen in an open area close to the forest, It is consider common in rural areas of Japan.

Individual seen close to a forest and rocky areas in the island of Chibu; they are relatively common in wild areas thru Japan. Deciduous forests, broad-leaved evergreen forests, mixed forests, farmlands, and urban areas from coastal to subalpine zones.

Known as a Raccoon dog, for its superficial resemblance to the raccoon Picture By my son Eytan Sequeira Mora. Taxonomic Notes: There are six recognized subspecies: albus, koreensis, orestes, procyonoides, ussuriensis and viverrinus. It has been suggested recently that Japanese Raccoon Dogs should be classified as a distinct species Nyctereutes viverrinus with two subspecies N. v. viverrinus and N. v. albus (Sang-In et al. 2015). The classification is based on chromosomal, molecular and morphological differences between Japanese and mainland populations (see also Kauhala and Saeki 2004a). ( http://www.iucnredlist.org/details/14925... )

Thanks for the comments I will let Eytan knows about hi picture been selected as the SOTD.

Congratulations Jonathan ! never heard of this species before now. Thanks for sharing this.

Another case of humans introducing animals to areas where they don't belong, for their own needs and then culling them...

Amazing series Jonathan,fantastic animal,congrats on the well deserved SOTD and thanks for sharing

Congratulations Eytan and Jonathan, your tanuki is our Spotting of the Day:

"Learn about the Japanese Raccoon Dog (Nyctereutes procyonoides viverrinus) - known as tanuki in Japanese- in our Spotting of the Day! The tanuki is a subspecies of the Asian raccoon dog, a canid (and not a raccoon!) native to East Asia and later introduced and expanded to the Russian Far East, Central Asia and parts of Europe via the fur trade. It is abundant in Japan, where its habitat includes deciduous forests, evergreen forests, mixed forests, farmlands, and urban areas from coastal to subalpine zones, and where it plays an important part in local folklore and legends. Raccoon dogs are considered a basal canid species (they resemble ancestral forms of the family), and are the only canids that go into torpor during winter".

Thanks for the changes Jonathan! This is interesting information as the raccoons dogs seem to be present on some of these small islands and not on others.

Thanks Daniele, I just ask Eytan. and I id some changes. it was seen in Nishinoshima. it is a very small Island ...He will look for them again to describe more of it behave... and I will update the info.

Great images Jonathan! Congratulations to Eytan. Do you have actual Habitat information for the spotting (as opposed to generic)? Which of these islands was it on (the pin is in the water)?
It would seem the subspecies for the Japanese raccoon dog is viverrinus and not ussuriensis:
https://en.wikipedia.org/wiki/Japanese_r...
http://www.iucnredlist.org/details/14925...

So glad you enjoy this ssp.

Looks like it got bit...must have been in a fight, poor dear! A new species for me...thanks so much for posting.