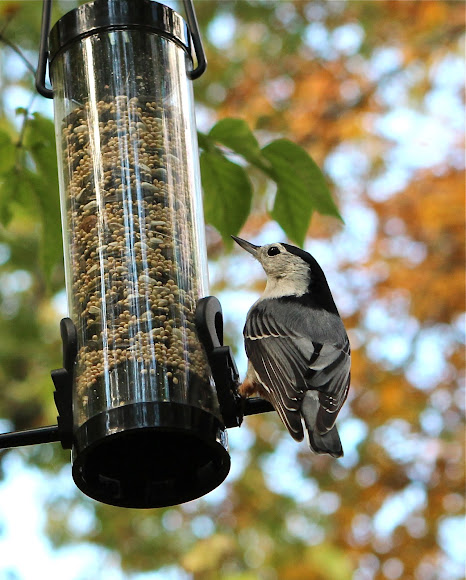 White-breasted Nuthatch has a large head, short tail, short wings, a powerful bill and strong feet; it is 13–14 cm (5–6 in) long, with a wingspan of 20–27 cm (8–11 in) and a weight of 18–30 g (0.64–1.06 oz).[3] The adult male of the nominate subspecies, S. c. carolinensis, has pale blue-gray upperparts, a glossy black cap (crown of the head), and a black band on the upper back. The wing coverts and flight feathers are very dark gray with paler fringes, and the closed wing is pale gray and black, with a thin white wing bar. The face and the underparts are white. The outer tail feathers are black with broad diagonal white bands across the outer three feathers, a feature readily visible in flight.[2] The female has, on average, a narrower black back band, slightly duller upperparts and buffer underparts than the male. Her cap may be gray, but many females have black caps, and cannot be reliably distinguished from the male in the field. In the northeastern United States, at least 10% of females have black caps, but the proportion rises to 40–80% in the Rocky Mountains, Mexico and the southeastern U.S. Juveniles are similar to the adult, but duller plumaged.[2]

The breeding habitat of the White-breasted Nuthatch is woodland across North America, from southern Canada to northern Florida and southern Mexico. In the eastern part of its range, its preferred habitat is old-growth open deciduous or mixed forest, including orchards, parks, suburban gardens and cemeteries; it is found mainly in the lowlands, although it breeds at 1,675 m (5,500 ft) altitude in Tennessee. In the west and Mexico, this nuthatch is found in open montane pine-oak woodlands, and nesting occurs at up to 3,200 m (10,500 ft) altitude in Nevada, California and Mexico.[2] Pinyon-juniper and riverside woodlands may be used locally where available.[8] The White-breasted Nuthatch is the only North American nuthatch usually found in deciduous trees; Red-breasted, Pygmy and Brown-headed Nuthatches prefer pines