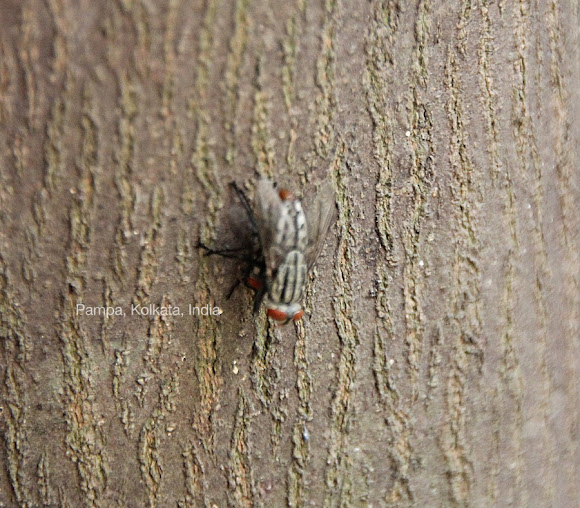 Flies in the family Sarcophagidae (from the Greek σάρκο sarco- = flesh, φάγε phage = eating; the same roots as the word "sarcophagus") are commonly known as flesh flies.They differ from most flies in that they are ovoviviparous, opportunistically depositing hatched or hatching maggots instead of eggs on carrion, dung, decaying material, or open wounds of mammals, hence their common name. They have black and gray longitudinal stripes on the thoraxand checkering on the abdomen. Other key features include red eyes and a bristled abdomen. The eyes are smooth and very rarely hairy. About 2500 species are in this family.

The majority of species in the large genus Sarcophaga are scavengers of small carrion, such as dead insects and snails or smaller vertebrates. A few species feed on larger vertebrate carcasses. Flesh flies and their larvae are also known to eat decaying vegetable matter and excrement, and they may be found around compost piles and pit latrines.

Though they can carry leprosy bacilli, flesh flies usually are not problems as disease carriers or even as nuisances and pose little threat to human welfare or to livestock. A few cases are known in which flesh fly maggots have burrowed from wounds into the healthy flesh of livestock, and some species can cause intestinal pseudomyiasis (infection by fly larvae) in humans who consume food contaminated with larvae.