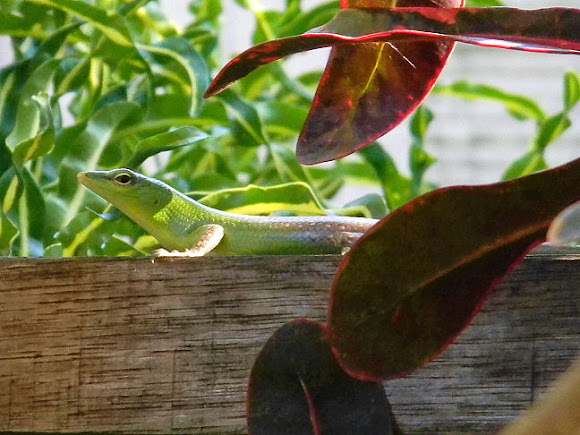 A shy green tree skink. A (primarily) arboreal lizard known from "forests in the Taiwan, Palawan and Sulu archipelagoes as well as the Indo-Australian archipelago [-- includes New Guinea] and the Solomon and Santa Cruz islands. Eating mostly insects and other small creatures, although occasionally living on fruit and plants, they prefer bare tree trunks without climbing plants. Several have even been sighted on minute islands with very little greenery, the record being four palm trees."

Spotted on a fence separating a large semi-urban yard from other houses. There is a disturbed patch of remnant lowland forest nearby.

The description in quotes above comes from Wikipedia. Now for some personal observations. This species is common here in northern Papua [or biogeographically speaking, northern New Guinea]. There are 100% green specimens and there are some with tails and hindquarters colored brown while anteriorly colored green (like this specimen). These lizards are arboreal, but they can occasionally be seen on the ground. In this spotting the skink is navigating along a fence. This is proving to be a common behavior here. I have also observed them falling or jumping or being pushed by other skinks, to lower tree branches; sometimes falling all the way to the ground. While they may show site (tree) fidelity, they may also look for new trees to stake out a home.

If only I had a rapid-focus/rapid-fire camera! He wouldn't sit still ;-)

I love him between all the beautiful leaves.