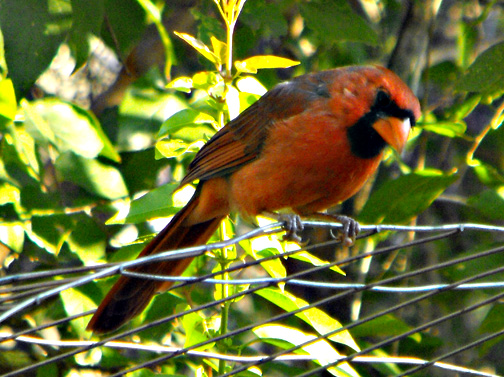 The Northern Cardinal is a mid-sized songbird with a body length of 20–23.5 cm (7.9–9.3 in) and a wingspan of 25–31 cm (9.8–12 in). The adult weighs from 33.6–65 g (1.19–2.3 oz), with an average 44.8 g (1.58 oz). The male averages slightly larger than the female. The adult male is a brilliant crimson red color with a black face mask over the eyes, extending to the upper chest. The color becomes duller and darker on the back and wings. The female is fawn, with mostly grayish-brown tones and a slight reddish tint on the wings, the crest, and the tail feathers. The face mask of the female is gray to black and is less defined than that of the male. Both sexes possess prominent raised crests and bright coral-colored beaks. The beak is cone-shaped and strong.[8] Young birds, both male and female, show the coloring similar to the adult female until the fall, when they molt and grow adult feathers. They are brown above and red-brown below, with brick-colored crest, forehead, wings, and tail. The legs and feet are a dark pink-brown. The iris of the eye is brown. The plumage color of the males is produced from carotenoid pigments in the diet. Coloration is produced from both red pigments and yellow carotenoid pigments. Northern Cardinal males possess the ability to metabolize carotenoid pigments to create plumage pigmentation of a color different from the ingested pigment. When fed only yellow pigments, males become a pale red color, rather than a yellow.

The Northern Cardinal (Cardinalis cardinalis) is a North American bird in the genus Cardinalis; it is also known colloquially as the redbird or common cardinal. It can be found in southern Canada, through the eastern United States from Maine to Texas and south through Mexico. It is found in woodlands, gardens, shrublands, and swamps.

Pairs mate for life, and they stay together year-round. Mated pairs sometimes sing together before nesting. During courtship they may also participate in a bonding behavior where the male collects food and brings it to the female, feeding her beak-to-beak. If the mating is successful, this mate-feeding may continue throughout the period of incubation. Males sometimes bring nest material to the female cardinal, who does most of the building. She crushes twigs with her beak until they are pliable, then turns in the nest to bend the twigs around her body and push them into a cup shape with her feet. The cup has four layers: coarse twigs (and sometimes bits of trash) covered in a leafy mat, then lined with grapevine bark and finally grasses, stems, rootlets, and pine needles. The nest typically takes 3 to 9 days to build; the finished product is 2–3 inches tall, 4 inches across, with an inner diameter of about 3 inches. Cardinals do not usually use their nests more than once. The female builds a cup nest in a well-concealed spot in dense shrub or a low tree one to three meters (three to ten ft) off the ground. The nest is made of thin twigs, bark strips, and grasses, lined with grasses or other plant fibers. Eggs are laid one to six days following the completion of the nest. The eggs are white, with a tint of green, blue or brown, and are marked with lavender, gray, or brown blotches which are thicker around the larger end. The shell is smooth and slightly glossy. Three or four eggs are laid in each clutch. Eggs measure approximately 1 x .75 inches in size. The female generally incubates the eggs, though, rarely, the male will incubate for brief periods of time. Incubation takes 12 to 13 days. Young fledge 10 to 11 days after hatching. Two to three, and even four, broods are raised each year. The male cares for and feeds each brood as the female incubates the next clutch of eggs. The oldest wild Cardinal banded by researchers lived at least 15 years and 9 months, although 28.5 years was achieved by a captive bird. Annual survival rates for adult Northern Cardinals have been estimated at 60 to 65%; however, as with other passerine birds, the high mortality of juveniles means that the average lifespan is only about a year.